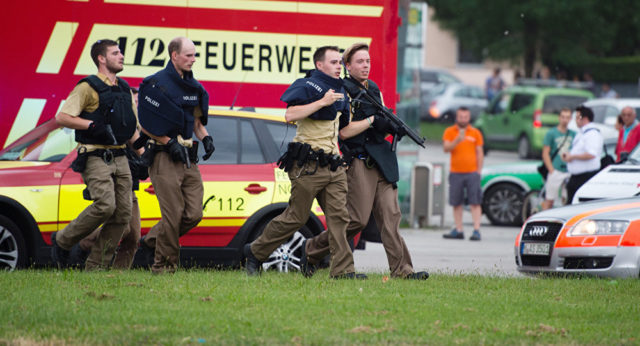 Update – Actual footage of one shooter below

“An eyewitness told German media that one of the attackers, outfitted with military-style boots, screamed “Scheib Auslander,” German for “F**king Migrants.”

Also, a video posted on social media shows a suspect on the roof of the mall shooting and saying “I am a German,” according to German newspaper Abendzeitun-Muenchen.”

[ Editor’s Note: This is a moving story that we will be updating, as two shooters are still at large at this posting time. The statement below about no link to Islamic terrorism is a just a preliminary one, meaning the information on the shooters is way too sparse to be tagging any particular group. We will know soon enough.

This coming on the heels of the axe killings on the train could be the start of a string of copycat attacks, something that ISIS has been calling on its sleeper agents to do, as they are all considered cannon fodder to be used that way.

The mall was said to be frequented by a lot of immigrants which means this might have been a local thug terror attack on random immigrants. One shooter opens up here. You can freeze frame if and do a screen grab as I am about to do.

A completely unarmed Germany is a sitting duck for these kinds of attacks. In many communities, even seeing a policeman is a rarity, and an armed one, more so. How many bodies will it take to be piled up before the Germans realize that self defense starts with having something to defend yourself with, and it’s called a gun… Jim W. Dean ]

At least six people have been killed in a mall shooting in the city of Munich, Germany, in what police have confirmed to be a terrorist attack.

The shooting took place at the Olympia-Einkaufszentrum shopping mall in the Moosach district of Munich, Germany. Police have confirmed at least six deaths and multiple people are injured. There are reportedly three gunman who are currently on the run. One of the gunman has committed suicide, according to German newspaper Bilde.

Police say there is no apparent link between the shooting and Islamic terrorism. 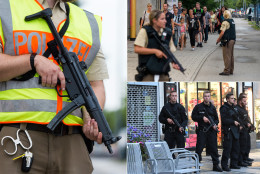 There are also reports of shooting at a second location. Germany TV channel ARD reports that the city’s main train station is being evacuated at this time. The public transport agency reports that all subways, buses, and trams in the city have been suspended for the time being.

A state of emergency has been declared in Munich, with special operations underway. The anti-terror special unit of the federal police has been deployed to the city. Border patrol helicopters have also been rerouted to join in the manhunt.

German police have warned that the suspects are still on the run and have advised citizens to avoid public areas. According to Bavarian broadcaster BR, police are also asking people to avoid highways near the city.

Police are carrying out a major operation near the shopping center, the Bild newspaper reported. According to the Abendzeitung Muenchen newspaper, the police were notified of the events at 15:52 GMT.

Police at Olympia Park Station in Munich told Sputnik they did not have any information on the victims.

“We are receiving calls confirming that there were shooting in the shopping mall but we don’t have information on victims,” the police said.

“There are several shooters, it is not just one person. Shooting is still going on outside, but not inside the mall, they are gone, we are searching for them,” Olympia Park Station police said.

Munich police are currently conducting a major operation in the vicinity of the shopping center where the shooting took place, and requests citizens to avoid that area.

The attack occurs as German Interior Minister Thomas de Maiziere is on holiday in the United States. He has not yet commented on the incident.

Germany authorities have been on high alert since the axe attack onboard a train in Bavaria on Monday.