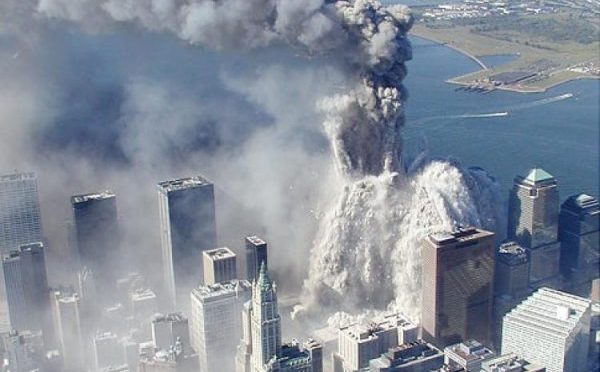 Do you know anybody who still believes the official 9/11 narrative? Ask them a few of these 26 questions – you may change their life.

1) Did you know that a third World Trade Center high-rise building also fell on September 11th? WTC Building 7 was a 47-storey, steel-framed skyscraper located a full block away from the Twin Towers and it was not even hit by any plane. Nonetheless, it fell at near free-fall speed straight down into its own footprint at 5:20 p.m. that afternoon.

2) Did you know that the owner of Building 7, Larry Silverstein, said “We’ve had such a terrible loss of life that maybe the smartest thing to do is “pull it” [Building 7] and they made that decision – to pull – and then we watched the building collapse”? And yet The 9/11 Commission Report never mentioned a thing about Building 7 [“Pull” is an industry term for using controlled demolition.]

3) Did you know that “Lucky” Larry Silverstein was awarded 4.68 billion dollars in insurance claims for the Twin Towers which he had just leased six weeks before 9/11 from the Port Authority of New York. The Port Authority had previously declined to spend the multi million dollars necessary to remove the asbestos and bring the Towers up to code required by law?

4) Did you know that – in the history of architecture – fire has never caused any steel-frame building to collapse, except on 9/11 when three skyscrapers fell at near free-fall speeds despite the fact that there were scores of massive steel columns in the core of each of the Twin Towers?

5) Did you know that almost every one of the WTC steel beams and girders were quickly shipped overseas – before any independent investigation – and melted down? (This is unprecedented and contrary to federal crime scene laws, making Rudy Giuliani indictable for those federal crimes.)

6) Did you know that fighter jets routinely are scrambled the minute any airplane loses contact with the FAA or deviates from its flight path and the jets usually only take 20 minutes to get in the air?

7) Did you know that in the nine months preceding 9/11 there were 67 jet fighter scrambles of wayward airplanes and that on average 100 intercepts occur each year?

8) Did you know that the Secret Service broke established protocols by allowing President Bush to remain in a well-publicized classroom photo op for at least 8 minutes after it was revealed to him that “America was under attack” (when Andy Card informed him that the second plane had hit the second tower)?

9) Did you know that the Securities Exchange Commission (SEC) has never revealed the unidentified traders who made millions of dollars in profits by short-selling the stocks of American and United airlines that were impacted by the attacks?

10) Did you know that there were countless warnings of “impending terrorist attacks” from at least 11 countries prior to 9/11 and that the threat level for such an attack was ‘blinking red’ according to the Director of the CIA George Tenet?

11) Did you know that Attorney General John Ashcroft, San Francisco Mayor Willie Brown, author Salmon Rushdie and (according to Newsweek) a group of high-ranking generals at the Pentagon were warned not to fly on 9/11 but never revealed who told them?

12) Did you know that in September of 2000 a NeoConservative group of Republicans known as The Project for A New American Century (PNAC, many of whom would become key officials in the Bush administration the next year) wrote that their proposed massive military buildup would proceed slowly “absent some catastrophic and catalyzing event – like a new Pearl Harbor”?

13) Did you know that at least 6 of the alleged 9/11 hijackers were reported to be still alive according to BBC and UK print media reports in the weeks following 9/11?

14) Did you know that the FBI has said that there is no evidence to link Osama bin Laden to 9/11 and that Osama was never wanted for the crime of 9/11 on its Ten Most Wanted Fugitives list?

15) Did you know that the leading scholar of Osama bin Laden (Bruce Lawrence) stated that the December 2001 confession tape, which the Bush White House flaunted, was a fake?

16) Did you know that Secretary of State Colin Powell promised a White Paper proving that Osama bin Laden and al Qaeda were responsible for 9/11 back in 2001 – but never produced it?

17) Did you know that the Bush administration resisted the formation of the 9/11 Commission for 441 days? Or that similar investigations, such as those for Pearl Harbor, the JFK assassination and the space shuttle disasters, all started within one week?

18) Did you know that ”The Jersey Girls” – four courageous 9/11 widows – finally forced the 9/11 Commission into existence and presented many questions, 70% of which were ignored? Or that under the leadership of Bush administration insider, Philip Zelikow, the final report failed to address any of the evidence pointing to official complicity? (And the 9/11 Commission Report never said word one about WTC 7?)

19) Did you know that no official agency (the FAA, FBI or the airlines) has ever released a list of the 9/11 passengers – including the names of the supposed hijackers, but within hours after the attacks, the FBI unbelievably released a definitive list of the 19 so-called hijackers?

20) Did you know that multiple air defense drills (war games) were planned for the morning of 9/11 and that these exercises left only a few pairs of fighter jets available to protect the entire North East Air Defense Sector of the United States leaving Washington and NYC vulnerable to an attack?

21) Did you know that there was no visible airplane debris where Flight 93 supposedly crashed near Shanksville, PA. There was only a small smoking hole in the ground, much like a bomb crater, with a pile of planted scrap metal, but that there was debris from the aircraft found 8 miles away at New Baltimore? And that Shanksville Mayor Ernie Stull said three different times in an interview (for a 2003 German documentary) that there was “no airplane”?

22) Did you know that office furniture burns at low temperatures of 600 to 800°F, and that jet fuel (kerosene), an ordinary hydrocarbon, has a maximum burning temperature of 1200°F, but that steel doesn’t start melting until temperatures reach 2750°F?

23) Did you know that tests have shown that cellphone calls – back in 2001 – could not have been made at altitudes over 8,000 feet for any meaningful duration and that, more significantly, United Airlines Flight 93 was proven to be 35,000 to 40,000 feet when calls were said to have been made?

24) Did you know that bombs went off in the North Tower in the sub-basement a few seconds before the first plane hit – according to Willie Rodriguez, a janitor who became known as the last man out and who was awarded a medal by President Bush for his bravery in rescuing dozens of people from the North Tower before it collapsed? Rodriguez testified that he and fellow workers heard multiple explosions coming from various locations in the floors above.

25) Did you know that alleged hijacker Hani Hanjour was known as an incompetent pilot to his trainers and yet he supposedly pulled off an unprecedented 270° turn at 500 mph, diving 7,000 feet in less than 3 minutes? And then supposedly crashed Flight 77 into the least populated, most reinforced section of the Pentagon?

26) Did you know that the mainstream media (MSM) in the US is owned and controlled by five or six major corporate conglomerates and that there has been very limited and sporadic coverage of alternative views about 9/11? Any time the issue of 9/11 is raised, the MSM accuses the questioner of being a conspiracy theorist or even a traitor.

Source: 26 Questions That Deceived Americans Need To Ask About 9/11 | Your News Wire

I’m an author on these subjects and I can say with some authority, Michael Salla did a really good job comparing the theories of pole shift authors like Charles Hapgood, Chan Thomas, and Rand Flem-Ath in this presentation. The basic conclusion from these ice core samples is that although Eastern Antarctica has been covered in … END_OF_DOCUMENT_TOKEN_TO_BE_REPLACED