. . . AND WE THE PEOPLE ARE BEING ENSLAVED BECAUSE WE AREN’T TOLD THE DEFINITIONS!

ARE YOU ALIVE OR DEAD? 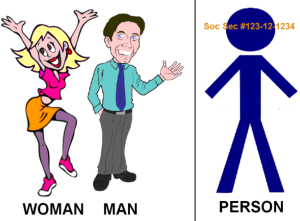 The key to the word game is “Person” and it is everywhere in our government and legal system from the federal level to the local level.

In legal-land, “PERSONS” AREN’T REAL – THEY ARE FICTIONAL!

When the UNITED STATES went bankrupt in the 30s because of the banksters orchestrated “great depression”, so-called “federal” government representatives pledged (hypothecated) the future earnings and productivity of the American people to the banksters as payment of the debt.[i]

hypothecate: to pledge to a creditor as security without delivering, as property.

Franklin Delano Roosevelt (FDR) was put in office in 1933 to administer this new system of government/economics. It was called The New Deal and sold both to Congress and the American people as an emergency solution to a national economic nightmare. The state of emergency declared at the time has been maintained ever since.[ii]

Source: It Is All a Word Game: Why “Persons” Are Not Real – Prepare for Change

I’m an author on these subjects and I can say with some authority, Michael Salla did a really good job comparing the theories of pole shift authors like Charles Hapgood, Chan Thomas, and Rand Flem-Ath in this presentation. The basic conclusion from these ice core samples is that although Eastern Antarctica has been covered in … END_OF_DOCUMENT_TOKEN_TO_BE_REPLACED