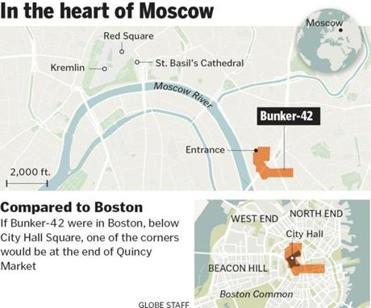 September 30, 2016 By: Sorcha Faal, and as reported to her Western Subscribers

Just a day after the Security Council (SC) reported that President Putin had ordered the convening of the “Holy War Council” in response to the Obama regime threat to launch terror attacks on Federation soil if Russia didn’t stop fighting Islamic State (ISIS/ISIL/Daesh) terrorists in the Levant War Zone, the Ministry of Defense (MoD) is now reporting that all “Level B” ministries (Moscow local) are now being evacuated to their assigned nuclear protected bunkers in the “secure renovated” Tagansky Protected Command Point (Bunker 42)  after US Secretary of State John Kerry issued a new threat to break off all diplomatic contact with the Kremlin—and that is considered as an act of war. [Note: Some words and/or phrases appearing in quotes in this report are English language approximations of Russian words/phrases having no exact counterpart.]

Important to note is that on 26 August all top Federation federal ministries were evacuated to their nuclear protected bunkers in anticipation of this war, but the adding of “Level B” ministries (local governments/police and fire resources, etc.) today shows that preparations for an immediate attack are now fully underway.

Fueling this grave move, this report explains, is the Obama regime, and its NATO allies, “unpredictable/unstable” response to the Syrian militaries planned assault on the city of Aleppo against the Western supported al-Qaeda and Islamic State terrorists who over the past week have killed hundreds of innocent civilians.