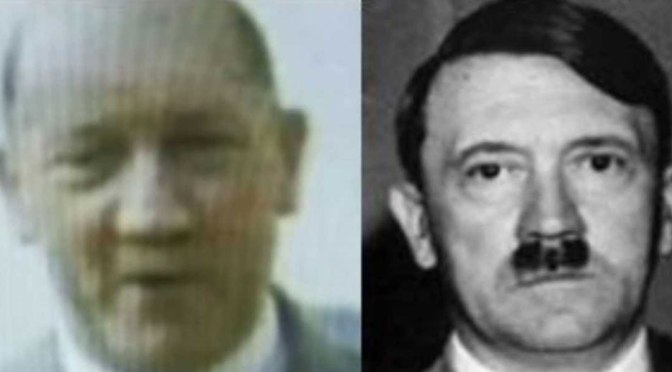 Long considered the purely fictitious musings of conspiracy theorists, rumors Adolf Hitler did not die in a murder-suicide pact with his newlywed, Eva Braun — but instead escaped to live under the radar in South America — might actually hold weight, after all.

Officially, whatever worth that could offer, Hitler met his fate with a gunshot to the head, while Braun ingested cyanide in a subterranean bunker on April 30, 1945, as the Allies finally quashed the Nazis. Forces then burned their bodies and the pair was subsequently buried in a shallow grave nearby.

But what if this narrative had merely been a comfortable cover spoon fed the public to mask the Führer actually being whisked away in a shadowy plot to ensure he wouldn’t fall into the clutches of advancing Soviets?

If the thought perhaps seems a bit ‘tin-foily’ for your taste, first consider the United States’ morals-thwarting Operation Paperclip.

Nearly 500 Nazi scientists — particularly those specializing in aerodynamics, rocketry, chemical weapons and reaction technology, and medicine — were secreted to White Sands Proving Ground in New Mexico; Huntsville, Alabama; and Texas’ Fort Bliss without even the knowledge of the State Department. As obvious security threats and war criminals, those scientists wouldn’t have qualified for visas through official channels — but the government, foregoing ethical implications in pursuit of their knowledge, indeed facilitated safe passage to the U.S.

Though much information about what has alternately been called Project Paperclip remains classified, that Nazi scientists did receive paychecks courtesy of the U.S. government to advance national goals is admitted fact. In that context, would Hitler being given a similar VIP escape plan be that outside the realm of possibility?

Historian Abel Basti extensively details this hypothesis in a new edition of his book published in Argentina, “El Exilio de Hitler,” or “Hitler in Exile” — an account now making headlines, even in media as mainstream as the Huffington Post.

“There was an agreement with the US that Hitler would run away and that he shouldn’t fall into the hands of the Soviet Union,” Basti said. “This also applies to many scientists, the military and spies who later took part in the struggle against the Soviet regime.”

Basti posits Hitler slipped to safety via a tunnel beneath the Chancellery connected to Tempelhof Airport, where a helicopter then whisked the former Führer to Spain. Traveling first to the Canary Islands, Hitler made his way to Argentina on a U-boat, where he lived for ten years before settling in Paraguay under the protection of dictator Alfredo Stroessner, himself with German roots.

As the historian tells it, the former brutal fascist died there on February 3, 1971.

“Wealthy families who helped him over the years were responsible for the organization of his funeral,” Basti explained. “Hitler was buried in an underground bunker, which is now an elegant hotel in the city of Asuncion. In 1973, the entrance to the bunker was sealed, and 40 people came to say goodbye to Hitler. One of those who attended [the funeral], Brazilian serviceman Fernando Nogueira de Araujo, then told a newspaper about the ceremony.”

But Basti isn’t alone in this hypothesis.

Bob Baer, a CIA operative with 21 years’ experience and “one of America’s most elite intelligence case officers,”described a similarly covert, government-facilitated escape plan in a documentary series for the History Channel called Hunting Hitler, which aired in early 2015.

“American Army officials in Germany have not located Hitler’s body nor is there any reliable source that Hitler is dead.”

Further discrediting the official story — and backing up doubts raised by Basti and the Baer team — a report in the Guardian in 2009 shattered previously-‘irrefutable’ physical evidence of Hitler’s suicide: the former Führer’s bullet-pierced skull.

American researchers performed a DNA analysis of that skull — once preserved in secret by Soviet intelligence, now held by Russian State Archive in Moscow — to determine the legitimacy of claims the bones were indeed Hitler’s.

But in the genetics lab at the University of Connecticut, archeologist and bone specialist Nick Bellantoni made a startling discovery. From the outset, Bellantoni noticed telling discrepancies:

“The bone seemed very thin; male bone tends to be more robust. And the sutures where the skull plates came together seemed to correspond to someone under 40” — but Hitler turned 56 in April 1945.

Bellantoni’s suspicions from physical examination of that skull fragment — which the team diligently confirmed authentic — were backed up by the molecular, genetic analysis. That skull, which the Soviets had proffered as proof of Hitler’s self-inflicted gunshot for decades, belonged to an as-yet unidentified female.

Though possible the skull fragment, found to be of a “woman between the ages of 20 and 40,” according to Bellantoni, could belong to Eva Braun, no narrative of events ever claimed Hitler’s former bride was shot. And though many died near the Chancellery, the Soviets and then Russians verified the area from which the fragment was retrieved as the exact spot the couple’s bodies had been doused in fuel and burned.

Further, Basti claims Braun not only also fled Germany unscathed, but far outlived Hitler — though he hasn’t been able to track her past the age of 90, where she last resided in Buenos Aires.

As early as 2000, the BBC reported Hitler biographer Werner Maser cast doubt on the authenticity of the skull — despite steadfast public affirmation from Russian officials.

South America did indeed play host to many fleeing Nazis — including sadistic doctor Josef Mengele, whose torturous experimentation of Nazi concentration camp prisoners eventually branched into the study of twins. Later, in a small town in Brazil, one in five pregnancies resulted in births of twins — something Argentine historian Jorge Camarasa claimed in 2009 evidenced Mengele’s handiwork following his escape from Germany.

Whether or not you make a habit of doubting official stories, evidence of Hitler’s deft departure from Germany — rather than a death by his own hand alongside his bride of just a few hours — appears more solid by the year.

As biographers, researchers, scientists, historians, and others carefully piece together a credible counter-narrative, perhaps Hitler’s suicide stands as one more falsely-constructed story designed to comfort an atrocity-weary public — as well as veil the ethical avulsion of an awkward truth.