Submitted by Carey Wedler via TheAntiMedia.org,

Wikileaks claimed Monday it was under attack after it announced it would release hundreds of thousands of documents related to Turkey and the failed military coup attempted Friday, CNET reported.

The organization, which has released information on everything from war crimes to Hillary Clinton’s email scandal, announced Sunday it would be releasing 100,000 documents related to Turkey’s “political power structure,” some of which detail the “leadup” to the coup. 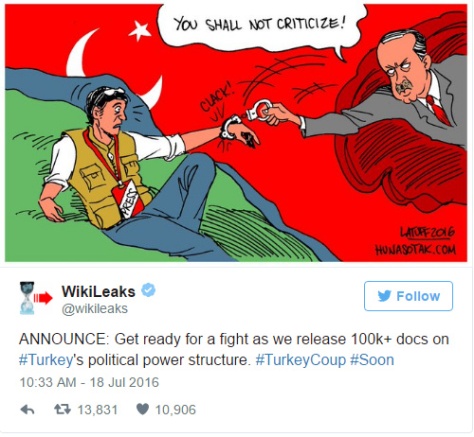 Wikileaks anticipated the release would be censored in Turkey, cautioning in a three-part tweet posted Monday:

“Turks will likely be censored to prevent them reading our pending release of 100k+ docs on politics leading up to the coup. We ask that Turks are ready with censorship bypassing systems such as TorBrowser and uTorrent and that everyone else is ready to help them bypass censorship and push our links through the censorship to come.”

“Facebook, Twitter and YouTube were reportedly blocked in Turkey during the attempted coup Friday, but many residents appear to have gotten around the blocks, posting messages and videos, likely using VPNs or other anonymizing services.”

Throughout Monday, Wikileaks continued to promote the release.

They then tweeted that instead of 100,000 documents, they would actually be releasing far more. “Our pending release of 100k docs on Turkish political power? Just kidding. The first batch is 300k emails, 500k docs,” they announced.

But just hours later, they alerted followers their website was being attacked. “Our infrastructure is under sustained attack,” they tweeted, alongside the hashtag, #TurkeyPurge.

“We are unsure of the true origin of the attack. The timing suggests a Turkish state power faction or its allies. We will prevail & publish,” Wikileaks tweeted shortly after.

An hour later, the organization remained resolute in its determination to publish the hundreds of thousands of documents. “Coming Tuesday: The#ErdoganEmails: 300 thousand internal emails from Erdo?an’s AKP – through to July 7, 2016,” they tweeted.

After tweeting further about the ongoing cyber attacks, Wikileaks eventually announced Tuesday they had released the first installment of emails, which can be viewed here. The emails are from the server of the AKP.

The failed military coup in Turkey over the weekend heightened tensions within the country, where President Erdogan has grown increasingly autocratic. The Turkish government has also been implicated in the rise of ISIS and has been accused of allowing fighters to cross through their borders and providing them with medical assistance.

The coup, which continues to be mired in uncertainties, accusations, and conflicting reports, left Turkish citizens between a rock and a hard place—a military coup or an increasingly oppressive democratically-elected leader who has now overseen 50,000 suspensions or detainments of government employees regarding the military’s failed attempt to seize power.

It seems Wikileak’s release of information on Turkish power structures could not come at a more vital time—that is, so long as it reaches the Turkish people.

Source: Wikileaks Is About To Expose The Turkish ‘Coup’, But Someone Is Trying To Silence Them | Zero Hedge