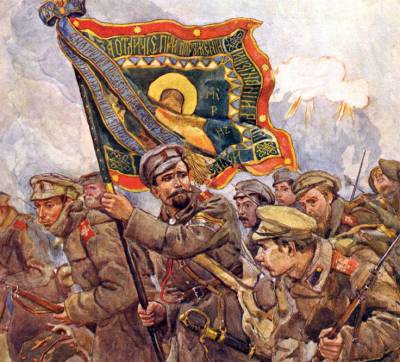 “The American Empire is against Russia in the same way that it is against all the countries in the “Axis of Evil.” In the case of Russia, whether it uses “Neo-Nazis” in Ukraine to achieve its ends, Jihadis in Chechnya, or Liberals in Moscow, the intent is always the same: to bleed, dismember or demoralize Russia.”

Russia’s rocky relationship with America had many opportunities to reach detente, if not outright friendship. Still, despite Putin’s best attempts to bring Russia in on the war against Islamic Terrorism, America’s response has been frosty at best.

This is because the Anglo-Zionist’s vendetta against Russia has trumped any and all consideration of the advantages that cooperation in the war on terror could have provided for America.

One could make the same comparison with Syria.

Now, even with the threat of Islamic terror and takeover looming in Europe, there is still nothing but war drums being beat against Russia for their stand in Syria to support the legitimate and secular government of Bashar Al-Assad.

Russia is just one country that America seems to be hell bent on destroying. Syria is another. The United State continues to fund Islamic terror with attempts to depose Assad and throw yet another Middle-Eastern country into chaos and open the door for Islamic fundamentalists to take power. All while the United States is seemingly at war with terrorism abroad.

Russia’s attempts to prop up the legitimate government of Bashar Al-Assad must be seen in the context of the struggle to uphold international norms of behavior and stand up to the seemingly bizarre policy of Pax Americana.

The excellent Gregory Hood from Radix Journal explains the situation with characteristic succinctness:

On a global scale, Russia is leading this resistance. Putin’s decision to ban the “pro-democracy” groups and foreign activists responsible for the “color coded” revolutions in Eastern Europe marked his transition to an anti-American “bad guy” in the eyes of the media.

Whatever his (many) failings, Putin insists on his idea of “sovereign democracy” and the survival of Russia as a self-conscious entity.

This is echoed in Assad’s pronouncement that he has no alternative but victory, as if he loses, “Syria is finished” in the same way that Iraq today is simply a geographic expression.

Although many countries in which there is resistance to the Anglo-Zionist empire are not Nationalist or even Right-Wing in their conception of themselves, they are still important axes of resistance. Hood again:

Russia is not some lost ideal for the North American New Right, Putin is not some nationalist paragon, and Russian exports like the Fourth Political Theory are not some glorious path to victory for us.

… the only geopolitical imperative that matters today is the ability of states to secure an independent existence from this system. Without this potential, even talking about ethnostates and White Republics misses the point. For that reason, states as diverse as Chávez’s Venezuela, Iran, and above all Syria deserve our attention.

Breaking patriotic American conservatives away from their minders at Conservatism Inc. is a critical strategic objective.

Patriots in the West need to take notice of the paradigm change. Resistance is no longer left-wing or right-wing, but anti-globalist. The symbols of the left and the right can both be used to symbolize this resistance. This brave New American Century foreign policy makes many grand pronouncements about its utopian vision for the world, but they are all smokescreens…  Hood continues:

It’s not about terrorism, or democracy, or even Israel. American foreign policy is already post-American, designed to break down any centers that show signs of independence from the international financial system of Wall Street and London.

It is no coincidence that Gaddafi suddenly fell from favor when he began to move away from trading oil in dollars. Syria also represents a territory that still has a degree of real independence from the global banking system. It is for that reason it must be broken.

Geopolitically, Russia is the final target, as its large energy reserves and nationally conscious ruling class prevent it from being simply absorbed into the system of financial control that rules the West.

The American Empire is against Russia in the same way that it is against all the countries in the “Axis of Evil.” In the case of Russia, whether it uses “Neo-Nazis” in Ukraine to acheive its ends, Jihadis in Chechnya, or Liberals in Moscow, the intent is always the same: to bleed, dismember or demoralize Russia. Why is this so?

Talk of Islamization, terrorism, or who is “pro-Western” or “anti-Western” conceals the real agenda. In the world of the future, peoples are to have no collective existence, we are all to be assimilated in one collective blob.

And for now, America is the iron fist that facilitates this transition.

Source: Russia IS The Resistance