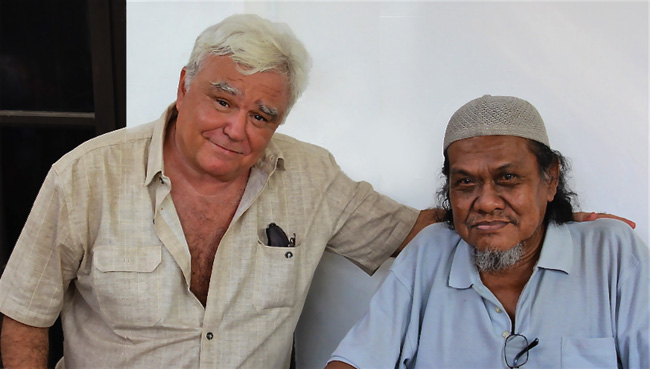 Let’s Kick The Garbage Out To The Curb

Apologies are extended to those that might not have gotten things straight without this preface.

Initially I was under the assumption that we had nailed the former Sri Lankan President and Japanese Gold buyers (as well as government) in an attempted theft of 20 thousand metric tons of gold.

As things turned out it was not an attempted theft, it was a theft already cemented – and 4 years prior. The rest of the detail follows and I cannot wait to review the audit of all accounts and put those responsible away where they belong.

As one can see nowadays these shenanigans are rampant among the politicians and banksters. Hell is too nice a place for them so let’s find a place more fitting for them NOW.

I will request arrest warrants from the UN and ruffle their feathers seeing that they are not worthy of being referenced as real men or real women. We will straighten this crap out and send them all back to where they came from.

It is in our hands now, not their hands. They will be at our mercy and no longer vice versa.

P.S. Karen Hudes bought a gun. Ha ha I guess she knows what she has done and what she deserves. And hell she is a big enough target.

Ali Baba is alive and well… attempting to relieve the East of its Gold! Most recently, the “Ali Baba role” has been played on various occasions by Jeb Bush, Ban Ki-moon, Obama, and many others who are  desperately trying their utmost best to steal and build up their Gold chests/coffers under myriad guises cloaked in deception.

They intend to collapse the US Dollar and still control the world’s finances.

If you live in Asia, you see and understand when Westerners appear almost everywhere looking (unlawfully) for precious metals and other riches. Lately, more often than not, they’re told to take a hike and leave the country immediately!

This is to also say that the East likes honest, respectful Americans, but strongly dislikes those who misrepresent themselves or try to hide their underhanded, illegal ways that do great harm to many good people and their countries as well as the world’s economy.

In light of all of this, Neil Keenan and Group K have altered their way of doing business in the East, building honorable business relationships as well as in creating an impressive resume on their way to opening the Global Accounts.

Because it is directly related to the Global Accounts, Neil and Group K have now come to the rescue!

Upon further investigation and our decisive action in verifying said research, we discovered that the Global Accounts were indeed tampered with in 2012 and Assets were stolen by the following:

The above mentioned are known to have participated along with others (both known and unknown) in the theft of 20,000 MT of Gold from the Global Accounts, belonging to DEPOSITOR (owner) Dragon Family, being held in the bunkers of Sri Lanka under the protection of the former President of Sri Lanka, Mahinda Rajapakse, who at that time was the HOLDER of said assets (Not the owner).

Here is the key information about what happened at that time:

3). Mr. Keiji Matsumura Corporate Advisor of Japuga Holding Company, Limited in Japan was appointed to proceed with this metal transaction.

4). Mr. Matsumura appointed Mr. Rajagopal Kartheepan I.D. No. 833433342 V to proceed on behalf of Japuga and Credit Suisse with the relevant authorities in Sri Lanka. 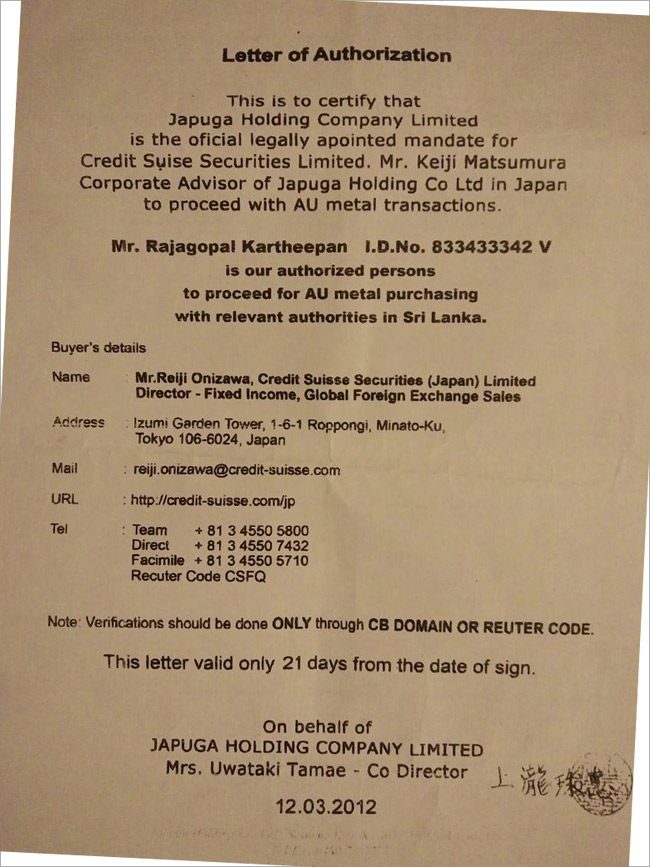 The seller received payment which was, and most likely still is, located in the Central Bank of Sri Lanka.

To reiterate: Not anyone other than the former Sri Lankan President and a few others have received any payments at all!

What was earmarked for Humanitarian Packages ended up in the hands of a few greedy Globalists. Consequently, a full audit is being immediately commenced in Sri Lanka.

Without delay a fully-fledged transparent, ongoing investigation is required following the incriminating lead and fact-filled documents in our hands substantiating the above evidence as having taken place along with uncovering in great detail each and every participant’s role.

Unfortunately, what you will find is that this conspiracy extends to the West – right back into the hands of more Globalists!

What we need to strongly emphasize to governments, which are actually corporations, as well as to the Globalist banks, et cetera, is that THEY WILL NO LONGER BE TOLERATED!

In addition, through very specific auditing of said Bunkers/Accounts, they will be publicly exposed, tried, and sent to jail for very long terms.

Those listed above are all part of a heinous conspiracy to defraud, not only the DEPOSITORS, the Dragon Family, but also the People on this planet.

Again, those names that are included in this article are all involved in the theft of 20 Thousand Metric Tons of Gold which was designated for Humanity Packages/Programs.

Former President Mahinda Rajapakse, the Holder and the SELLER, betrayed not only the Global Accounts and the Dragon Family, but he also deceived his very own people and his country – who did not receive one cent, despite the funds being deposited in the Sri Lankan Central Bank.

The Sri Lankan people thought the assets belonged to the National Treasury for the well-being of their country. Whichever way you look at it, a huge theft took place with impunity (however, that will change very soon!)

Furthermore, the former President turned his back on any and all aides who assisted him in this transaction, thus making the theft complete. His crony, the current President of Sri Lanka, is also hereby implicated in this matter and should not be allowed to escape justice.

To be clear, we say once again (although it cannot be said too often to these crooks):  Auditing is being undertaken, and you have nowhere to go or hide!

To all “Ali Babas”: There are no “Open Sesames” here! There are NO escape routes! We’re coming for you!

Be advised that Justice will have its way sooner rather than later, although it can’t happen soon enough.

The planet’s patience is at an end.

I’m an author on these subjects and I can say with some authority, Michael Salla did a really good job comparing the theories of pole shift authors like Charles Hapgood, Chan Thomas, and Rand Flem-Ath in this presentation. The basic conclusion from these ice core samples is that although Eastern Antarctica has been covered in … END_OF_DOCUMENT_TOKEN_TO_BE_REPLACED