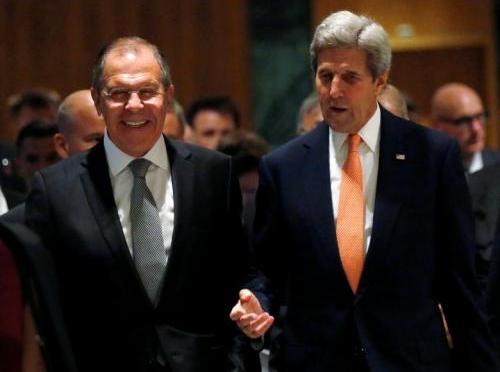 It was late on Friday night at the President Wilson Hotel in Geneva, and tired, hungry journalists were waiting in the hotel’s windowless basement ballroom for word from either US SecState John Kerry or his Russian colleague, foreign minister Sergei Lavrov, that (yet another) deal over Syria had been reached, or alternatively, none was coming. The process was being held back by Kerry, according to Reuters, as US negotiators were engaged in back and forth consultations with officials in Washington. Lavrov confirmed as much when he told reporters to blame the American, expressing disbelief that things were taking so long.

“I hope before Washington goes to sleep we can get some news,” he said.

An hour or so later, he fed the press corps another tidbit, literally. Lavrov, accompanied by a posse of officials, including one bearing a tall stack of pizza boxes, announced that they
were a gift “from the U.S. delegation”. But while the pizza was from the Americans, the booze came from Russia: as reporters were eating the pizza, Lavrov came again, this time to hand over two bottles of Russian vodka.

Then, when it seemed that all hope for a Friday deal was lost, and discussions over a peaceful Syria would extend indefinitely a process that started over two weeks, there was good news if only for sleep-deprived reporters: The United States and Russia announced they had reached a breakthrough deal on Saturday to put Syria’s peace process back on track, including a nationwide truce effective from sundown on Monday, improved humanitarian aid access and joint military targeting of banned Islamist groups. 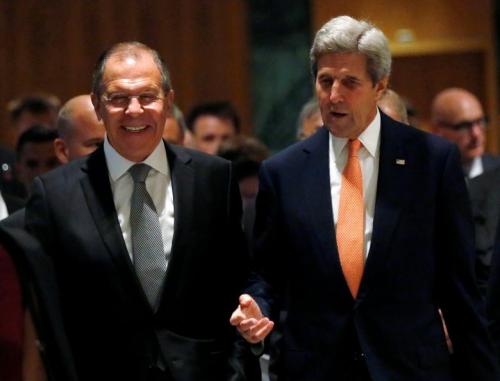 Cited by Reuters, late on Friday night Kerry told a news conference in Geneva that “today, Sergei Lavrov and I, on behalf of our presidents and our countries, call on every Syrian stakeholder to support the plan that the United States and Russia have reached, to … bring this catastrophic conflict to the quickest possible end through a political process.”

Lavrov said that despite continuing mistrust – after all this is merely the latest in a long series of “deals” all of which have promptly been voided by the two superpowers – the two sides had developed five documents that would revive a failed truce agreed in February and enable military coordination between the U.S. and Russia against militant groups in Syria.

There is just one catch: the terms of the latest deal are a secret, and nobody knows what was actually decided, as both sides agreed not to release the documents publicly.

It was almost as if the “stronger” of the two negotiating parties did not want to reveal that it had granted substantial concessions in the public domain.

Still, there was optimism: “This all creates the necessary conditions for resumption of the political process, which has been stalling for a long time,” Lavrov told a news conference. The deal followed talks that stretched late into Friday night and several failed attempts to hammer out a deal over the past two weeks.

“The Obama administration, the United States, is going the extra mile here because we believe that Russia, and my colleague (Lavrov), have the ability to press the Assad regime to stop this conflict and to come to the table and make peace,” he said.

While details of the agreement were confidential, Kerry said the “bedrock” of the new deal was an agreement that the Syrian government would not fly combat missions in an agreed area on the pretext of hunting fighters from the banned Nusra Front, an al-Qaeda affiliate in Syria. Because, as a reminder, the US is now officially arming the al-Nusra spin off, but it’s ok: it changed its name, so the US is no longer actually arming a recognized terrorist organization.

“That should put an end to the barrel bombs, and an end to the indiscriminate bombing, and it has the potential to change the nature of the conflict.”

Under the agreement, Russian-backed government forces and opposition groups, supported by the United States and Gulf States, would halt fighting for a while as a confidence building measure. During this time, opposition fighters will have the chance to separate from militant groups in areas, such as Aleppo (whose location Gary Johnson knows all too well at this moment) where they have become intermingled.

What happens next is unclear: previous efforts to forge agreements to stop the fighting and deliver humanitarian aid to besieged communities in Syria have crumbled within weeks, with the United States accusing Assad’s forces of attacking opposition groups and civilians. That said, if the truce holds from sundown on Monday, Russia and the United States will begin seven days of preparatory work to set up a “joint implementation center”, where they will share information to delineate territory controlled by Nusra and opposition groups.

Both warring sides would pull back from the strategic Castello Road in Aleppo to create a demilitarized zone, while opposition and government groups would both have to provide safe and unhindered access via Ramouseh in the south of the city. “We must go after these terrorists,” Kerry said. “Not indiscriminately, but in a strategic, precise and judicious manner so they cannot continue to use the regime’s indiscriminate bombing to rally people to their hateful crimes.”

Kerry even has some words of warning for the Nusra spin off, the Levantine Conquest Front. Recall that on July 28, the leader of the Jabhat al-Nusra front, Abu Mohamed al-Golani confirmed that his group has formally split from al-Qaeda and has renamed itself Jabhat Fath al-Sham or the Levantine Conquest Front. “The creation of this new front aims to close the gap between the jihadi factions in the Levant,” Golani said in his first televised appearance. “By breaking our link, we aim to protect the Syrian revolution. We thank the leaders of al-Qaeda for understanding the need to break links.” For the real motive behind the split, read this article.

Kerry warned that all sides in the conflict would need to adhere to the nationwide truce, cautioning opposition fighters that if they did not separate from Nusra they would not be spared from air attacks.

Meanwhile, the US continued to keep Russia at a distance: according to Reuters, Pentagon and U.S. intelligence officials have spoken out against the idea of closer military cooperation with Russia, in particular the sharing of locations of opposition groups that have fought to topple Assad. U.S. Defense Secretary Ash Carter, who only days ago delivered a forceful speech in England criticizing Russia, has long been skeptical of Moscow’s intentions in Syria.

The Pentagon in a statement it would carefully monitor the “preliminary understanding” agreed on Friday and cautioned the Assad regime and its backer, Russia, to stick to deal requirements. “Those commitments must be fully met before any potential military cooperation can occur,” Pentagon spokesman Peter Cook said. “We will be watching closely the implementation of this understanding in the days ahead.”

Actually, there is another catch in the latest peace “deal”: as Reuters pointed out moments ago, as of Saturday morning fighting raged on in southern Aleppo, the army and rebels said, just hours after Kerry and Lavrov hailed their “breakthrough deal” to put Syria’s peace process back on track.

The army attacked rebel-held areas, pushing to maximize recent gains before a new nationwide ceasefire was due to come into effect on Monday. Insurgents said they were planning a counter offensive. “The fighting is flaring on all the fronts of southern Aleppo but the clashes in Amiryah are the heaviest,” said Captain Abdul Salam Abdul Razak, the military spokesman of the rebel Nour al-Din al Zinki Brigades.

We expect the rebels to retaliate over the next 48 hours, at which point the “secret” ceasefire will supposedly be implemented, only to be broken fast with either sides accusing the other of being responsible, and so on, because peace in Syria is definitionally impossible: as of this moment, it is in the interest of every major outside power for the civil war to continue; the only losers are the Syrian people, who will continue leaving the country by the millions, making their way to the heart of Europe and Angela “open door” Merkel’s warm embrace.

Source: US, Russia Clinch “Breakthrough” Syria Deal Over Vodka, But There Is A Catch | Zero Hedge