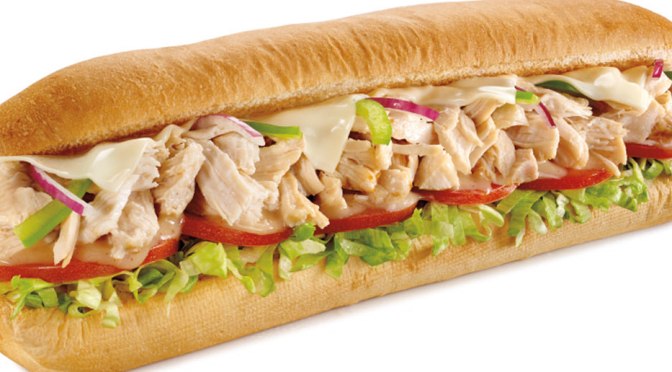 By Julie Fidler. As far as fast-food joints go, Subway is considered to be one of the healthier ones. The chain offers many low-calories menu items, and it agreed to ditch a harmful bread additive found in yoga matsafter concerned citizens inked a petition demanding the chemical’s removal. But an investigation by the CDC Marketplace reveals what some are calling a disturbing and disgusting secret about Subway’s chicken strips: they’re not 100% chicken. [1]

A Marketplace DNA analysis of the chicken, found in Subway’s grilled sandwiches and wraps, found that in the case of 2 popular Subway sandwiches, the strips only contained about 50% chicken DNA.

An unadulterated piece of chicken should come in at 100% chicken DNA. Seasoning, processing, and marinating can drop that number, so fast-food chicken seasoned for taste shouldn’t be expected to reach 100%. But out of all the sandwiches tested, Subway had the lowest percentage of chicken DNA:

Subway’s oven-roasted chicken scored a mere 53.6% chicken DNA, while the chain’s chicken strips scored only 42.8% chicken DNA. So, what else comprises most of Subway’s chicken?

In other words, you’re not just being fooled when you bite into a Subway chicken sandwich or wrap, you’re also consuming a major potential allergen.

The Marketplace investigation found that once the other (read: non-chicken) ingredients are factored in, the fast-food chicken contained about 1/4 less protein than you would get in a home-cooked piece of the poultry. Do you like a side of salt with your healthy chicken wrap? I hope so, because the sodium levels tested proved to be 7-10 times what they would be in a piece of unadulterated chicken.

Subway’s chicken is hardly fresh from the farm, as the company’s ads would have you believe.

Source: Investigation Reveals Subway Chicken is only About 50% Chicken DNA » The Event Chronicle