James Comey, the man who refused to bring charges against Hillary Clinton despite a mountain of concrete evidence that she, and several members of her staff, knowingly violated several federal laws, apparently used the largely discredited “Trump Dossier” to help secure a FISA warrant to secretly monitor Trump’s former campaign aide, Carter Page, according to CNN.

Among other things, the dossier alleged that Page met senior Russian officials as an emissary of the Trump campaign, and discussed quid-pro-quo deals relating to sanctions, business opportunities and Russia’s interference in the election. Page has denied meeting the officials named in the dossier and says he never cut any political deals with the Kremlin.  Per CNN:

The FBI last year used a dossier of allegations of Russian ties to Donald Trump’s campaign as part of the justification to win approval to secretly monitor a Trump associate, according to US officials briefed on the investigation.

The dossier has also been cited by FBI Director James Comey in some of his briefings to members of Congress in recent weeks, as one of the sources of information the bureau has used to bolster its investigation, according to US officials briefed on the probe.

This includes approval from the secret court that oversees the Foreign Intelligence Surveillance Act (FISA) to monitor the communications of Carter Page, two of the officials said. Last year, Page was identified by the Trump campaign as an adviser on national security.

According to the Washington Post, the warrant to monitor Page was obtained in the summer of 2016 which indicates that the FBI was in possession of the now-infamous dossier well before President Obama supposedly received his first briefing on the material in December 2016.

Of course, as we reported back in January (see “Here Is The Full 35-Page Report Alleging Trump Was “Cultivated, Supported And Assisted” By Russia“) the dossier, compiled by ex-British intelligence official Chris Steele, was almost immediately discredited by the public at large after numerous glaring errors were quickly identified and salicious stories of ‘golden showers’ and other sexual acts were also dismissed as pure rubbish.

Allegedly the dossier was even available to the Clinton campaign should they have chosen to use it to discredit Trump, but even they were quickly convinced that no one would buy it.

All of which, once again, brings into question the level of stupidity and/or pure corruption that must have been involved in this process given the shear number of people whose approval was undoubtedly required to authorize the issuance of a FISA warrant that paved the way for Comey and the Obama administration to secretly monitor the Trump campaign.

Meanwhile, Carter Page offered a simple reply to this latest revelation saying that he looks forward to the discovery process and testimony that will come from the lawsuit he plans to file in short order.

“I look forward to the Privacy Act of 1974 lawsuit that I plan to file in response to the civil rights violations by Obama administration appointees last year.  The discovery process will be of great value to the United States, as our nation hears testimony from them under oath and we receive disclosure of the documents which show what exactly was done in 2016.” 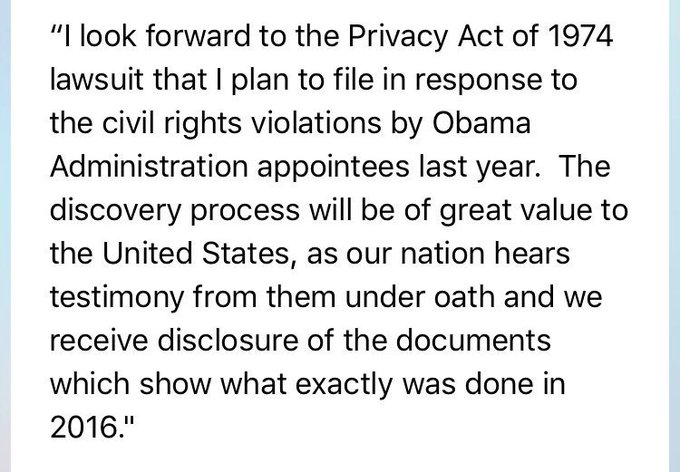 Statement from Carter Page re: CNN report that FBI used dossier to build case against him: “I look forward to…the lawsuit I plan to file”

I’m an author on these subjects and I can say with some authority, Michael Salla did a really good job comparing the theories of pole shift authors like Charles Hapgood, Chan Thomas, and Rand Flem-Ath in this presentation. The basic conclusion from these ice core samples is that although Eastern Antarctica has been covered in … END_OF_DOCUMENT_TOKEN_TO_BE_REPLACED