When we first reported about the imminent paralysis of an unknown number of global supply chains and a potential shock in worldwide trade as a result of the historic bankruptcy of Hanjing Shipping, one of the world’s largest container shipping companies which handles 8% of Trans-Pacific trade volume for the US market, we concluded that “the global implications from the bankruptcy are unknown: if, as expected, the company’s ships remain “frozen” and inaccessible for weeks if not months, the impact on global supply chains will be devastating, potentially resulting in a cascading waterfall effect, whose impact on global economies could be severe as a result of the worldwide logistics chaos.The good news is that both economists and corporations around the globe, both those impacted and others, will now have yet another excuse on which to blame the “unexpected” slowdown in both profits and economic growth in the third quarter.“

However, not even this extreme forecast captured what would happen just 48 hours later, when as the WSJ reported overnight, retailers have gone far beyond simply blaming the Hanjing bankruptcy for their upcoming woes: they are petitioning for a government bailout, or as the WSJ put it, they are “bracing for a blow as they stock up for the crucial holiday sales season, asked the government to step in and help resolve a growing crisis.”

Or, as America’s banks would call it, “get bailed out.” And, in taking a page right out of the 2008 bank bailout, the doom and gloom scenarios emerge:

“While the situation is still developing, the prospect of harm is significant and apparent,” Sandra Kennedy, president of the Retail Industry Leaders Association, wrote in a letter to the Department of Commerce and the Federal Maritime Commission. Hanjin’s recent bankruptcy filing “presents an enormous challenge to U.S. shippers,” she said, and “could have a substantial impact on consumers and the economy at large.”

The trade group is urging the U.S. to work with ports, cargo handlers and the South Korean government to resolve the widespread disruption in freight shipments caused by the Hanjin bankrupcy filing. Futhermore, the spokesman for the Retail Industry Leaders Association said they’re hoping the South Korean government could help provide clarity and speed to the bankruptcy proceedings, which are being considered by courts there. 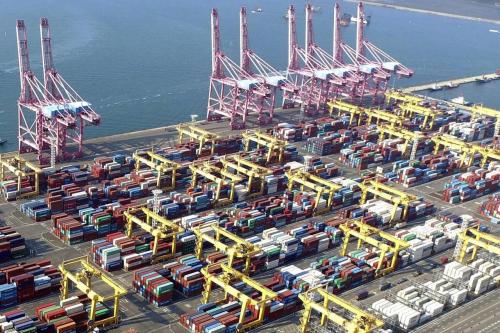 To an extent, the group has a point as the “clogged supply-chain” chaos unleashed by the Hanjing bankruptcy is rapidly spreading. As reported Wednesday, after the company’s bankruptcy protection, on Wednesday, terminal operators, ports, cargo handlers, truckers and others have refused to handle its cargo, for fear they won’t get paid. That is causing turmoil at U.S. ports and beyond, said shippers, importers and freight forwarders. Then as we followed up yesterday, U.S.-bound cargo has been delayed at the point of origin, and cargo-laden Hanjin ships are unable to get into U.S. ports. Worse, already delivered cargo is sitting unhandled, clogging ports and occupying containers needed elsewhere. Several Hanjin ships have been seized by creditors or barred from shipping cargo from Busan, South Korea’s main port, and vessels have been turned away from ports in the U.S., China, Canada, Spain and elsewhere.

According to the WSJ, freight brokers in Asia said about 540,000 containers are expected to face delivery delays that one of them said could range from a few days to more than a month. Meanwhile, as we also reported yesterday, shipping rates have soared as freight capacity shrank overnight, and indicative rates from Busan, South Korea, to Los Angeles had risen to $2,300 a container by Thursday, up from $1,700 four days earlier. One U.S. importer said he was getting rate quotes of $2,000 a container, compared with $700 before the Hanjin news.

Meanwhile, the reason why we immediately speculated that retailers will immediately use (and abuse( the Hanjin bankruptcy as a scapegoat (and apparently, demand a government intervention) is because the turmoil will only aggravate problems for retailers grappling with the challenges and high costs of e-commerce and at a crucial time. Those most likely to be affected include Wal-Mart, Target, J.C. Penney and clothing retailers. As the WSJ adds, a target spokeswoman said the retailer is watching development closely and assessing the situation. Marilee McInnis, a spokeswoman for Wal-Mart, said, “Right now, we are waiting to hear the final determination on bankruptcy proceedings and the implications to their current assets before we will be able to assess any impact.”

The biggest hit may come for the $25 billion US toy industry, however, which has been sweating the Hanjin news, as it prepares for the holiday season, responsible for half its annual sales. Jeff Bergmann, managing director of the Toy Shippers Association, said his customers are fortunate that only about 20 containers are on Hanjin or affiliated vessels. They’ve been told their freight will be delivered to the ports, but from there, “nobody knows,” Mr. Bergmann said. Beyond that, the general concern is how long the turmoil will last. “The ripple effect could be tremendous,” he said.

Cited by the WSJ, Jessica Dankert, senior director at the Retail Industry Leaders Association, said the congestion is coming during one of the worse possible times for retailers as they stock up before the critical holiday-shopping season. “These concerns would be trouble at any time,but this is a particularly bad time for it to happen.” She said retailers are considering contingency plans that include using other carriers and working to get their cargo released.

Unfortunately, going the litigation route will be a disaster, as cargo reclamation would bottleneck the legal system and leave it stuck in limbo for years. Even without a lawsuit, cargo owners will have to wait for months to get their cargo off Hanjin ships, analysts said.

”In 2001, Cho Yang, a much smaller Korean carrier, went bust and it took six months before a mere 200 containers, handled by a single freight forwarder, could be taken off to ports,” said Lars Jensen of Copenhagen-based Sea Intelligence Consulting. “This is at a much bigger scale so I would not be surprised if scores of boxes on stranded Hanjin vessels ever actually make it to their destination.”

But forget the retailers, will someone please think of the ship crews? Hanjin ships carry crews of 15 to 25 sailors, and with the vessels unable to call at ports, the sailors could be stranded at sea for weeks or longer. “They have food and water for a couple of weeks,” said Basil Karatzas of New York-based Karatzas Marine Advisors & Co. “Beyond that, things may become very difficult because suppliers will no longer extend credit to Hanjin and everything must be paid in cash.”

Maybe instead of US retailers using debt to buyback their stocks and land their management teams record bonuses, it is the crews who should be petitioning for a government rescue.

Finally, anyone hoping for a quick resolution to chaos unleashed by the Hanjin bankruptcy, should not hold their breath. While Hanjin has obtained creditor protection in Korea, and secured an injunction protecting its ships against seizure domestically, it needs to quickly file for bankruptcy abroad, especially in Europe and the US, in order to keep its ships moving.

“They got the injunction in Korea, but most of their ships are out at sea or at foreign ports. Ship seizures will continue and increase around the world if there is no bankruptcy protection.” Jensen said. “But sorting out such legal matters at various jurisdictions is complicated, as Hanjin has no control on how fast foreign courts will examine its case.”

For now, the only thing certain is that chaos will grow exponentially courtesy of today’s ultra sophisticated “just in time” supply chains which are amazingly efficient when they all work in sync, and just as easily lead to unprecedented problems (as we described several years ago in “Trade-Off”: A Study In Global Systemic Collapse“) when even the tiniest bottleneck emerges, quickly snowballing into a crisis of epic proportions.