WikiLeaks claim that the DNC and Podesta hacks were a “false flag operation” by the CIA, designed to undermine President Trump.

The Central Intelligence Agency’s UMBRAGE group used hacking tools to leave behind fake breadcrumbs that falsely traced any potential hacking back to Russia.

This Wikileaks release confirms what many independent news outlets have been saying all along: the Deep State wanted Clinton to win the Presidency due to the threat Trump poses to the globalists’ agenda.

The CIA’s Remote Devices Branch’s UMBRAGE group collects and maintains a substantial library of attack techniques ‘stolen’ from malware produced in other states including the Russian Federation.

With UMBRAGE and related projects the CIA cannot only increase its total number of attack types but also misdirect attribution by leaving behind the “fingerprints” of the groups that the attack techniques were stolen from. 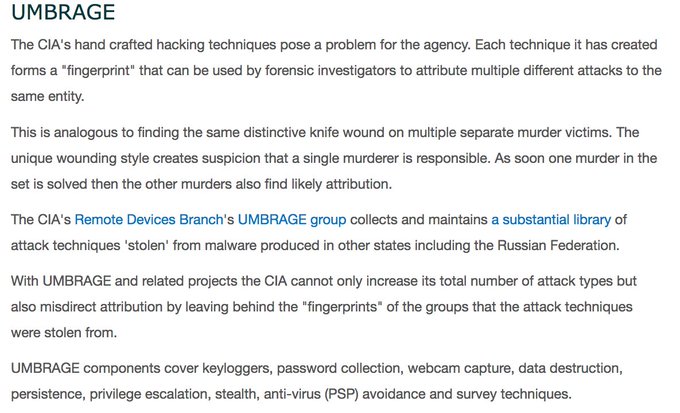 According to internet sleuths reading through the Vault 7 release on Tuesday, there are three theories about who was behind the Russian hacking scandal and why:

Theory 1: White Hats inside the intelligence agencies did it to help Trump.

Theory 2: An internal war within the Deep State especially regarding Clinton’s crimes and cover-ups of Benghazi, email security breaches, etc.

Theory 3: The DEEP STATE actors wanted to both take down Hillary and frame Trump vis a vis the ‘Russians hacked the election’ meme. I’m sure many in the embedded Establishment wanted a new puppet front man other than Trump or Clinton. This maneuver would undermine both parties and the Deep State wins again.