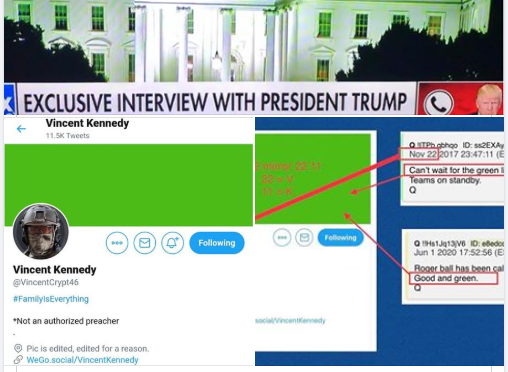 The Q Plan to is unfolding. The pieces are coming together daily. The Q posts are lining up. We are in the nexus of events and are charting our future together. This is The Plan as it is happening!

Joss Dumas
April 2 at 2:44 PM ·
💥💥💥💥
Cora sent Today at 12:39 PM
As we all know by now, Daniel Dowell (Whiplash347) signed out last night. He said we are done. I know that confused a lot of you so let me explain what he meant. Daniel has put out all the intel he can. There is no more that he can do. He put up links and keywords for us to research. He is stepping back until we get to the other side. He stated that he feels this is the Grand Finale of this portion in this war. He told me to step back (and finish his quilt lol) but I prefer to hang with the frogs.
So this is what he told me late last night….expect the nuclear scare event by saturday. That should be followed by the Rods of God taking out the 3G dams (and other places) which will take down big pharma, bitcoin, wuhan labs, the 24 nuclear reactors under the dam (which have already been disabled) basically disabling Chinas economic stability. Russia has their military on Ukraines border. North Korea is rattling their sword at the US. China and Iran threatening Israel. That is the WW 3 scenario set up for the nuclear scare event. We will jump to defcon 1. Then martial law. Now we know that this event is a false flag. Russia, North Korea, etc are all with Trump. The world leaders are actually united to destroy the evil and usher us in to a new earth age that comes with all new technologies and total freedom. All the bad happenings have to happen on the biden administrations watch. The military tribunal will flip the election and Trump will return as President.
So my family, that is why DD has stepped back. Everyone should be on Signal by now. If not hurry and get your family members set up on it because Q said to do it which i believe means since its a military setup it won’t be going down. Time will tell.
Oh, Facebook just gave me a warning that I need to be careful or they will disable my account. Lol. Well i got those warnings right before they disabled my three other accounts. So if I disappear, please find me on signal, telegram, gab or anonup.com. I will stay on as long as I can. Ok frogs, we knew that it was close…..I do hope DD is right. Wwg1wga. God bless us all. I do love you all. Mar❤️❤️❤️❤️❤️. F.R.O.G.s Forever!!!!

Psychic reading on the CURE

Is The 10 Days of Darkness all of the Biden Fake Presidency?

Y E S S S S S !!!!!!
This just received:
The United States are no longer under Civilian control. Pete Gaynor the head of FEMA is as is Christopher Miller and the US Military. Both were put in charge by President Trump and activated by executive order. Gaynor is a combat infantry expert with Marine Forces. Whats going on in DC with the fema tents right now? Oh you folks are about to be jolted wide awake soon. So now we have Christopher Miller, expert in unconventional warfare, and now Pete Gaynor with FEMA. Christopher Miller is 100% in charge of the Military right now. And Pete Gaynor in charge of FEMA. In the absence of a functioning government, who takes charge??? Who runs America? FEMA and the Military.. Who leads both of those? Christopher Miller and Pete Gaynor. BOTH OF THEM put in place by Trump.
So what do you see going on in DC right now? FEMA tents, FEMA Personal, FEMA vehicles, and also National Guard troops, whom are about to become FEDERALIZED, once the insurrection act is about to be unveiled. All in one swoop. Washington DC is going to be under control not by Trump, but under control by a contingency government, run by FEMA and the US Military…. We are in an active Military coup. But its a coup to restore the republic. Its against the fake Biden and Harris Election. Its taken alot longer than most people would have liked, but this operation was not put together thinking about the peoples timing, of when we want arrests, and when we want things to happen. Its out of Trumps control now, and has been for a few days.. Its now under FULL control of the US Military and FEMA authority.
FEMA Admin Pete Gaynor takes over DHS as acting head, in-charge of D.C.

Why is lady Gaga always around the crooked presidents?

, Inauguration canceled, Trump remains in office, ABC, NBC, CBS, FOX, CNN, MSNBC to lose LICENSES and would soon be out of the air, according to the president.

“I invoked the Rebellion Act of 1807 (U.S. Code, section 10 13 251-255) to address the treacherous rebellion carried out by Democratic Party lawmakers and agents of the CCP (Chinese Communist Party), the FBI, the Department of Justice, the CIA and others to dismantle the U.S. and the Constitution, “President Trump said Thursday, Jan. 14.” These entities pose a direct threat to national security. I will remain president indefinitely until all domestic enemies are arrested. “
President Trump invoked the rebellion law after another assassination attempt on him last Saturday.
According to intelligence sources, agents of the Chinese Communist Party, FBI, Ministry of Justice, CIA and others from Deep State, with the help of MSM, have been planning to break the United States and their Constitution for a long time.
The corrupt media did not report any of these acts of treason. Trump had evidence that the MSM were “integrated with agents of the CIA and the Chinese Communist Party, whose only goal was to direct public opinion towards the Deep State agenda.”
During President Trump’s four-year tenure, he and what has been called the Alliance have fought this Kabbalah, a Satan-worshiping force made up of thirteen Satanist families from Italy, the Vatican, royal monarchies, the M16, the Chinese Communist Party, the CIA, the FBI, the Justice Department. , Antifa, Black Lives are important and certain Republican and Democratic senators.
On January 9, the United States was in charge of the Marshal’s Law with President Trump as the supreme commander and General Flynn in charge of the armed forces. Trump has signed several executive orders which are, among other military powers, military arrests and courts.
Measures will soon be taken against more than 222,286 sealed indictments against political and global elites filed before federal courts across the country.
With the current Rebellion Law, Trump would remain president indefinitely until all domestic enemies are arrested. Including the media.

“I am issuing an executive order to remove the following propaganda media from the airwaves: ABC NBC, CBS, FOX NEWS, CNN and MSNBC. I’m also working with the FCC to revoke their licenses. We have evidence that all these media organizations employ Chinese Communist Party agents, as well as integrated CIA agents whose sole purpose is brainwashing, hypnotizing, and directing public opinion toward certain programs that support the left and the deep state. These organizations pose a threat to national security and virtually nothing they report is real news. “
It is not an easy task to bring down Kabbalah. Army and special forces units are deployed across the United States in more than 400 cities. At that time, there were more than 15,000 soldiers in DC, according to Army Secretary Ryan McCarthy. Special forces units secretly infiltrated Antifa and BLM and carried out silent covert arrests.
On January 9, POTUS and the Ministry of Defense postponed the presidential inauguration on January 20. Intelligence sources claim that if Joe Biden does not take office, the FBI has plans to help organize Antifa and BLM violence in DC and in all 50 capitals from Saturday, January 16 to Wednesday, January 20.
The corrupt media refused to publish anything other than his leftist agenda, which is believed to have been paid for by the CCP. Therefore, the President announced that he would soon activate the Emergency Broadcasting System (EBS). This was expected during what was called the Ten Days of Darkness.
With EBS, everyone would receive alerts on their phones, television, radio and the Internet. The broadcast would explain the worldwide silent war between Kabbalah and the Alliance.
On Wednesday, January 13, President Trump called for peace in an urgent message to the American people. He condemned the riots in the state capital, as well as the recent attack on social networks and freedom of expression, and then activated military forces to quell the riots.
Donald Trump Jr. announced that a new social media platform called Freedom social network will be coming soon.
More importantly, President Trump officially shut down USA Inc. and renewed the Republic on July 4, 2020. All of this was part of the Alliance for the Liberation of the World from Communist Parties / Repression of the People by Kabbalah. “Plan to save the world”:
As part of that plan, President Trump’s space forces were involved in eclipses around the world in several countries when Alliance Special Forces units made arrests. Multiple arrests were made on January 10, including in Frankfurt, Germany, the home of the CIA office, where Dominion’s voting machines illegally transferred votes from Trump to Biden in the 2020 elections.

From the depths of hell pic.twitter.com/N7NscFh5Wj

BREAKING: DNI Ratcliffe Releases Report Showing China Interfered with the 2020 Election and CIA Management Pressured Analysts Not to Report It

Listen carefully. Is this what’s going on in DC right now? pic.twitter.com/0pd2ZVn9iJ

From a friend of mine.
Patrick Bouvier Kennedy.
Whom i came in contact with in April 2019.#TheTruth.
Elvis was a Secret D.E.A Agent who brought down the Gambino Family. Paul Castellano. Howard Hughes helped him.
That requires many Disguises.
Priscilla told you he is a Pastor. pic.twitter.com/2qAOqprHrx

6000 Cures held back from humanity since 1930s.
Gold Shall Destroy The Fed.
1776.
How many more clues does Q have to drop before it becomes Mathematically Impossible?
Brad Parscale told everyone suppressed Technologies were being released. pic.twitter.com/yH4NleElHA

Will we see the New Federal State of China that are behind releasing the Hunter Biden files soon expose the corruption within the UK government in connection to CCP?