April 30, 2017 By: Sorcha Faal, and as reported to her Western Subscribers

An intriguing Security Council (SC) report circulating in the Kremlin today details a sharp and angry exchange between SC members Valentina Matviyenko (Chairwoman of the Council of Federation) and Sergei Lavrov (Foreign Minister of Russia) relating to if former United States President Barack Obama should be charged by the Prosecutor General’s Office for war crimes committed in Ukraine—and that Matviyenko says the precedent for doing so was established this past week by the Federation requesting that the International Criminal Police Organization (INTERPOL) issue an international arrest warrant for former Ukrainian Prime Minister Arseniy Yatsenyuk.  [Note: Some words and/or phrases appearing in quotes in this report are English language approximations of Russian words/phrases having no exact counterpart.]

According to this report, shortly after taking office, “associates” of President Donald Trump delivered to the Security Council previously classified documents confirming that the Obama administration “secretly and flagrantly” colluded with Arseniy Yatsenyuk to violently overthrow the democratically elected government of Ukraine in order to install a Neo-Nazi government—and that the world’s largest private intelligence agency Stratfor (the “Shadow CIA”) called “the most blatant coup in history”. 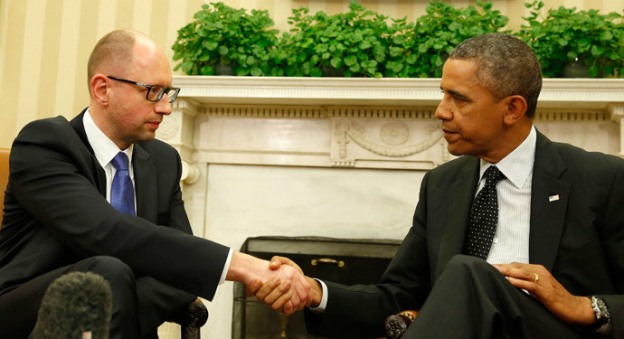 Upon receiving these secret classified US documents, this report continues, the Prosecutor General’s Office was able to obtain an in-absentia arrest for former Prime Minister Yatsenyuk allowing him to be put on an international wanted list on 21 February 2017.

With Prime Minister Yatsenyuk being the first former foreign head of state to be so charged in the modern era under Federation law, this report details, SC member Matviyenko argued that since the evidence shows former President Obama’s complicity in this international crime too, he should, likewise be charged.

Arguing against Matviyenko, however, this report says, is Foreign Minister Lavrov—whose position is that any international criminal charges made by the Federation against former President Obama would be an “incitement” to the United States and its Western allies, so much so, in fact, it would most certainly lead to war.

Countering Lavrov’s argument, however, this report notes, Matviyenko warns that war is now nearly inevitable between the Federation and the West anyway, but by charging President Obama with war crimes, could very well force the Western media to “expose/reveal” to their citizens the full horrors the United States has not only inflicted upon Ukraine, but is now preparing to do in America too.

Source: Fierce Battle Erupts In Kremlin Over If To Charge Obama With War Crimes

I’m an author on these subjects and I can say with some authority, Michael Salla did a really good job comparing the theories of pole shift authors like Charles Hapgood, Chan Thomas, and Rand Flem-Ath in this presentation. The basic conclusion from these ice core samples is that although Eastern Antarctica has been covered in … END_OF_DOCUMENT_TOKEN_TO_BE_REPLACED