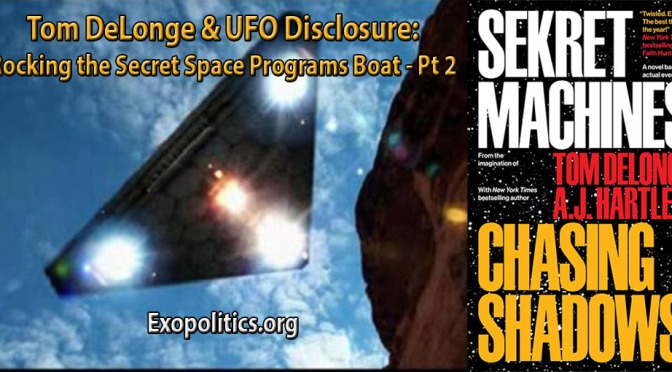 In Sekret Machines, Tom DeLonge spends much time describing the corporate involvement in developing a secret U.S. space program. According to him, a global consortium of corporations secretly funded the development of flying triangles using antigravity and torsion field principles adopted from the Nazi Bell experiments.

These resulted in the development of a squadron of TR-3B’s based out of Area 51’s highly secretive S-4 facility at Papoose Lake. The U.S. Air Force Space Command and Defense Intelligence Agency is in charge of the TR-3B or ‘Locust’, operating out of S-4, according to Delonge, as relayed by his advisory team.

Delonge went on to explain in Sekret Machines that the TR-3B is a combined U.S. military and corporate made aerospace vehicle capable of operating both near the Earth’s surface as a conventional aircraft, and in near Earth orbit as a spacecraft. He described different sized Locust vehicles, with the largest being several hundred feet across.

DeLonge’s information about the Locust closely matches the earlier revelations of Edgar Fouche, an aerospace engineer, who worked at Area 51. While there, he learned about the Locust’s existence as the most highly classified aerospace vehicle built by the U.S. military industrial complex in the late 1980’s.

In 1998, Fouche first came forward to reveal the Locust’s existence, and that it was stationed at the S-4 facility, and was as much as 600 feet wide, similar to what Delonge later claims he was told by his advisory team.

Fouche’s documentation provides much credibility to his testimony, which is also supported by the many flying triangle sightings reported in Belgium, and elsewhere. Indeed, a chapter inSekret Machines explains the 1989 Belgium sightings as directly related to flights of the Locust.

Once again, the testimony of William Tompkins and Corey Goode differs dramatically to DeLonge’s information as provided to him by his advisory team. Tompkins has revealed that he was directly involved in the design of space battle groups that would be under the control of the U.S. Navy.

In the 1950’s he conceptualized different designs for the space vehicles as revealed in two documents he released in his book, Selected by Extraterrestrials. Both the space carriers and cruisers were approximately two kilometers in length, and space transport ships event longer.

Goode has said that he directly served in Solar Warden from 1987 to 2007. Significantly, he says that the TR-3B Locust became outdated with the deployment of Solar Warden space fleets, and became a hand-me down from the U.S. Navy, to less classified programs run by the U.S. Air Force and other groups:

There were more than 8 of the “Cigar” shaped carrier class and other class of vessels of various sizes and classifications. They were designed to carry various type of “craft” that many think of as the TR-3B… The TR-3B is considered extremely outdated technology and in many cases has been gifted as “hand me down” craft to “Elites” within the Secret Earth Governments and their Syndicates as something akin to “Company Jets”. There are so many newer technologies that are of the same general shape as the TR-3B (& models that came after) that it would blow people’s minds

Consequently, what Goode and Tompkins testimonies reveal is that the Locust is part of a second tier secret space program run out of Area 51.

In Sekret Machines, an incident is described where an apparent UFO abduction occurs, but the female victim unmasks the extraterrestrial who is really a human disguised in an alien costume. After briefly escaping the remote facility where she is being held, she learns that she was taken to Siberia by a covert Russian group.

The abduction incident is depicted to be part of a Russian secret space program using technologically advanced arrow-shaped aerospace vehicles similar in flight performance to the Locust.

Consequently, it is not extraterrestrials behind many UFO incidents such as abductions and nuclear weapons deactivation, but Russian secret spacecraft according to what DeLonge was told by his advisory team. Once again, there is a dramatic difference here with what Tompkins and Goode have to say about extraterrestrials and secret space programs.

In part one, I commented on their accounts of Nazi Germany being assisted by Reptilian and Nordic extraterrestrial groups. Furthermore, according to Tompkins, Nordic extraterrestrials assisted the U.S. Navy program to establish space battle groups. The Nordics were seeking allies in their galactic conflict with the Draconian Reptilians, and believed that the US Navy would eventually become an ally.

Tompkins says that Nordic extraterrestrials were embedded in aerospace companies where he worked, such as Douglas Aircraft Company and TRW, and actively helped in the research and development of antigravity spacecraft. He asserts that the Nordics helped counter the industrial sabotage by Reptilians in both the NASA and the nascent U.S. Navy secret space program.

DeLonge however proposes a wildcard that helps explain stories of encounters with advanced extraterrestrial visitors and discovery of non-human constructed spacecraft. He refers to mythological accounts of the “Gods” as referred to in history and suggests these were not flights of fancy by ancient peoples, but real beings that manipulated humanity for both positive and negative agendas.

In Homer’s Illiad, for example, the reader of this epic poem learn how the Gods took different sides of this ancient war between the Greeks and Trojans – the superpowers of that region of the world at the time. The conflict was wholly contrived by a mischievous Goddess called Eris, who rolled her “golden apple of discord” at the foot of the Gods, and set off a chain of events that led to the Trojan War.

Sekret Machines ends on a cliff hanger regarding the role of the Gods and current secret space programs. It is expected that future volumes will describe different ways in which the Gods have helped foment geo-political conflict between major world powers such as the U.S. and Russia – the modern equivalents of Ancient Greece and Troy.

This is likely to involve the recovery of highly advanced non-human spacecraft at various crash retrieval sites, which DeLonge attributes to the Gods. These are modern day versions golden apples of discord planted by the Gods.

How does one account for the significant differences between secret space program disclosures by Delonge and his advisory team, with what Tompkins and Goode have said? If one accepts Tompkins and Goode’s testimonies as accurate, as my analyses suggest, then there are two scenarios which come to mind.

The first is that of a “limited hangout,” which according to Victor Marchetti, a former Special Assistant to the CIA Deputy Director, is “spy jargon for a favorite and frequently used gimmick of the clandestine professionals.” Marchetti went on to describe how a limited hangout works:

When their veil of secrecy is shredded and they can no longer rely on a phony cover story to misinform the public, they resort to admitting—sometimes even volunteering—some of the truth while still managing to withhold the key and damaging facts in the case. The public, however, is usually so intrigued by the new information that it never thinks to pursue the matter further.

A limited hangout scenario suggests that DeLonge is being fed a well-crafted narrative by his advisory team and the intelligence community, who believe their cover stories for the UFO phenomenon no longer have credibility. The new narrative is designed to appeal to widespread public belief in a cover-up of UFOs, by revealing some of the advanced technologies developed in deep black programs that would account for the UFO phenomenon dating back to the World War II era.

So while the public learns of antigravity space craft, they are told that the extraterrestrial hypothesis – that UFOs are interplanetary spacecraft – is false. The only ‘alien’ factor are elusive Gods mentioned in historical texts who are today manipulating the U.S. and Russia to launch a nuclear war, or planting advanced spacecraft in remote locations as “golden apples of discord”.

The preceding scenario appeals to scientific skeptics as well as followers from different religions who can view this information as confirming the legitimacy of their scriptures.

What this scenario suggests is that DeLonge is being given access to genuine information that is part of a limited hangout operation by the intelligence community, who are carefully crafting a narrative through DeLonge that maintains their legitimacy after some kind of official acknowledgement of a secret space program based at Area 51 which uses the TR-3B Locust.

After all, if there are Gods hidden in the shadows manipulating both Russia and the U.S. into having a nuclear conflict over advanced technologies, then the whole issue concerning secret space programs becomes firmly embedded in national security concerns.

The second scenario to be explored is that Delonge’s advisors are simply out of the loop when it comes to the most advanced secret space program technologies. Delonge has repeatedly said that his advisors work at or are familiar with Area 51 facilities, where the TR 3B Locust is based. Yet according to Tompkins, it is Utah’s Wasatch Mountains where the Navy’s space battle fleets are constructed and serviced.

What this suggests is that there is a secret space program run by military entities such as U.S. Air Force Space Command, the Defense Intelligence Agency and the National Reconnaissance Office, that is entirely separate to what the U.S. Navy has been doing in the Wasatch Mountains.

The compartmentalization process is so successful between the different space programs, that USAF/DIA/NRO personnel do not believe that such a Navy run space program exists. For example, Goode claims that in January and February of this year, he was abducted at least three times by covert teams associated with the USAF/DIA/NRO who interrogated him.

Goode’s abductors were interested in him since he had previously revealed accurate information about their classified programs, but at the same time they dismissed Goode’s claims concerning the existence of deep space battle groups under a Navy run program called Solar Warden.

Both Goode and Tompkin’s revelations suggest that there is a deeper layer of secret space program operations and technologies than anything happening in near Earth orbit under the control of the USAF/DIA/NRO.

In conclusion, it is plausible that the advisory team of ten senior corporate and military personnel advising DeLonge may be part of a limited hangout operation to spill the beans on what has been happening at Area 51, in order to keep hidden even more important secret programs happening elsewhere. Alternatively, DeLonge’s advisory team may be genuinely out of the loop of the Navy led Secret Space Program based out of the Wasatch Mountains which is currently operating in deep space.

Despite the question of which of the above two scenarios better explains what is happening with DeLonge and his advisors, the disclosures in Sekret Machines genuinely reveal the first layer of a multilayered set of secret space programs.