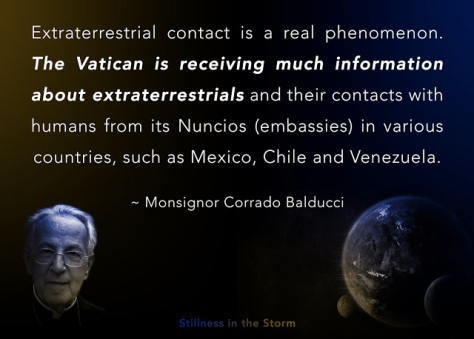 Vatican and the powers represented by it have long kept socially damaging information hidden from the public. Anything that threatens the status quo is quickly covered up by the Roman Cult, and its numerous intelligence agencies spread across the globe. Monsignor Corrado Balducci was a Catholic theologian who had close ties to Pope John Paul and Pope Benedict XVI. He has written about the occult, demonic possession, and extraterrestrials. The following is a paper recently shared by Dr. Richard Boylen of a talk Balducci gave in 2001, which stands as prima facie evidence that the Vatican and those close to them accept the reality of extraterrestrials.

Source: Vatican Theologian Says Aliens are Real and Are More Spiritual and Intellectual Than Humans — Paper by Monsignor Corrado Balducci | Stillness in the Storm