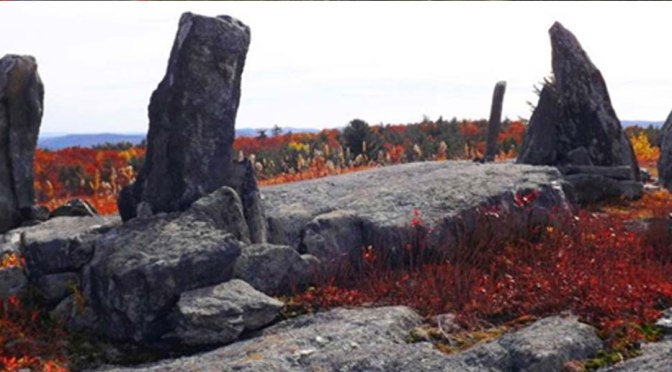 In the gorgeously rustic country hills of Northern Ireland, about an hour north of Derry, is the tiny hamlet of Laraghirril. In the distant southwestern fields of this town sits an ancient cairn with beautifully placed megalithic stones. The cairn is perhaps 4000 to 6000 years old, with crafted slabs protruding in dramatic symmetry out of the ground.  If you want to learn more about this ancient cairn at Laraghirril, interestingly enough, it will not be from this article.  Amazingly, the ancient Celtic altar in the image above is found in Heath, Massachusetts, on the other side of the Atlantic Ocean in the northeastern United States, otherwise known as New England.

New England is a small set of states about the size of Ireland, in terms of square kilometers. It stretches from Connecticut, northward along the Atlantic coast of Rhode Island, into the mountainous forests of upstate New York, Massachusetts, Vermont, and Maine. The old-growth forests and rocky mountain ridges of this area contain the same megalithic wonders that Celtic countries endear as part of their ancient mystical past. The images below are of Celtic megalithic works all within the region of New England. This includes: eloquent stone-chambers, ancient stone-linings of massive proportion at high elevations, cairns in practically every forest, altars on high rocky elevations, and beautiful standing-stones of a unique style specific to New England…

Source: Evidence of Ancient Megalithic Culture in Massachusetts Revealed For the First Time » The Event Chronicle

I’m an author on these subjects and I can say with some authority, Michael Salla did a really good job comparing the theories of pole shift authors like Charles Hapgood, Chan Thomas, and Rand Flem-Ath in this presentation. The basic conclusion from these ice core samples is that although Eastern Antarctica has been covered in … END_OF_DOCUMENT_TOKEN_TO_BE_REPLACED