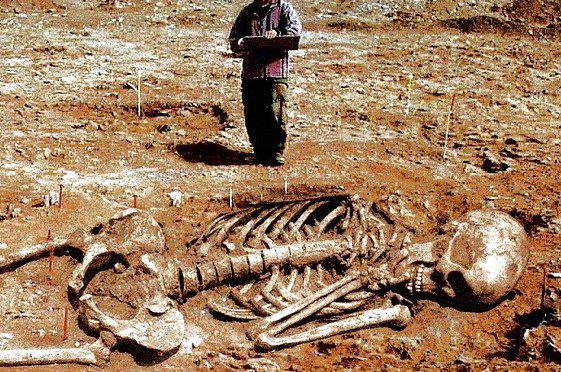 There are 36 of Tribes of Giants mentioned in the Bible:

* The Nephilim:
The word Nephilim does not appear in the Bible, nor any Hebrew pronunciation of any words translated in the Bible. But the word Nĕphiyl, pronounced Nepheel does in the first mention of Giants in Genesis6:4, and in Numbers 13:33 when describing the Giants of the promised land, Cannan. These giants were apparently the original giants spawned by the Gregori, the giant angels who mated with human females.

There are also 22 individual Giants mentioned, by name, in the Bible:

There can be no doubt that the people living in Canaan were either an organized tribe or group of giants living in great walled cities. This no legend found scrawled on some obscure buried tablet, but absolute biblical proof that the Nation of Israel confronted a giant race in the land of Canaan. Descriptions of encounters with other giants and giant tribes or groups are found in the Bible as well. This being true, is not logical to assume that there may have been other giant clans in other parts of the world gathered together to protect themselves from other humans, or more likely, from other giant tribes?
Could this be the reason why large groupings of giant bones are found together in caves and burial grounds all over the world? Consider the ones found only in Ohio, just in 19th Century: Conneaut 1800, Chesterville 1829, Vermillion 1858, Brush Creek Township 1870, Seneca Township 1872, Ashtabula County 1878, Zanesville 1880, Medina County 1881, Marion County 1883, Brown County 1883, Toledo 1888 and 1895, Proctorville 1892, Jackson 1897, and the Lake Erie Islands 1898.
Read More Here
This is a neat story.  Makes me want to right some neat fiction on it or something.  Id like to believe this.  Id like to think that there were indeed 36 tribes of giants on Earth.  The question is: why aren’t there still?   The products of human woman and angels cant be very stupid.  I would imagine they would be super human in strength, wits, creativity, etc.  So where did they all go and how?  Dare I pose, maybe aliens killed them all?  ~Ophelia

Source: 36 Tribes Of Giants: In The Bible And Around The World | Alternative

Christians who monitor Bible prophecies and world events for signs the Rapture is imminent have a message for the world – “the end times are nearly here. Buckle up, it’s going to be a wild ride.”

The Rapture Index, run by a website dedicated to monitoring world news for signs that the end times are near, hit its highest point ever in late 2016, and it has maintained the critical warning ever since.

Todd Strandberg monitors events such as Satanism, geopolitics, bizarre weather and plagues to work out the ‘Rapture Index’…

Source: Bible Experts Say 2017 Is The Year Of The Rapture – Your News Wire

In the next 90 hours we will see the Elites try everything within their powers to stop Donald Trump from being Inaugurated.

Under 90 hours folks – so here is the plans

1) All bombing attempts and fires have been stopped and nipped in the bud.

2) A Huge cache of weapons was just found blocks from the White House when a woman noticed a Violin Case and opened it to find 2 weapons. She called the US Park Police and they found dozens more at the site. Apparently left to disrupt the election.

3) There will be a huge Anti-Trump rally organized by dozens of Satanic NAZI Organizations to attempt top stop the Inauguration. The weather says it will be 51 Degrees there and will have periods of showers. Lazy Welfare Democrats do not rally well in the rain and to counter them will be 2 Million Bikers and Saturation Patrolling all over DC that day.