There are about 8,700 lawsuits pending against Monsanto, by people who allege that exposure to Roundup weedkiller is responsible for their cancer… 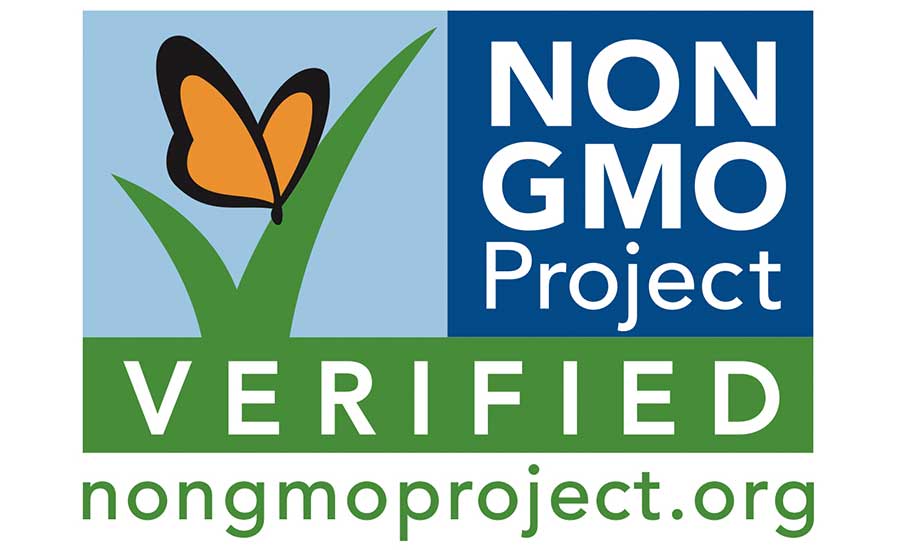 Concern over glyphosate in food is on the rise after Monsanto was found guilty in covering up their cancer-causing product, Roundup. Monsanto has been under scrutiny ever since they were ordered to pay $289 million in damages to plaintiff, Dewayne Johnson… 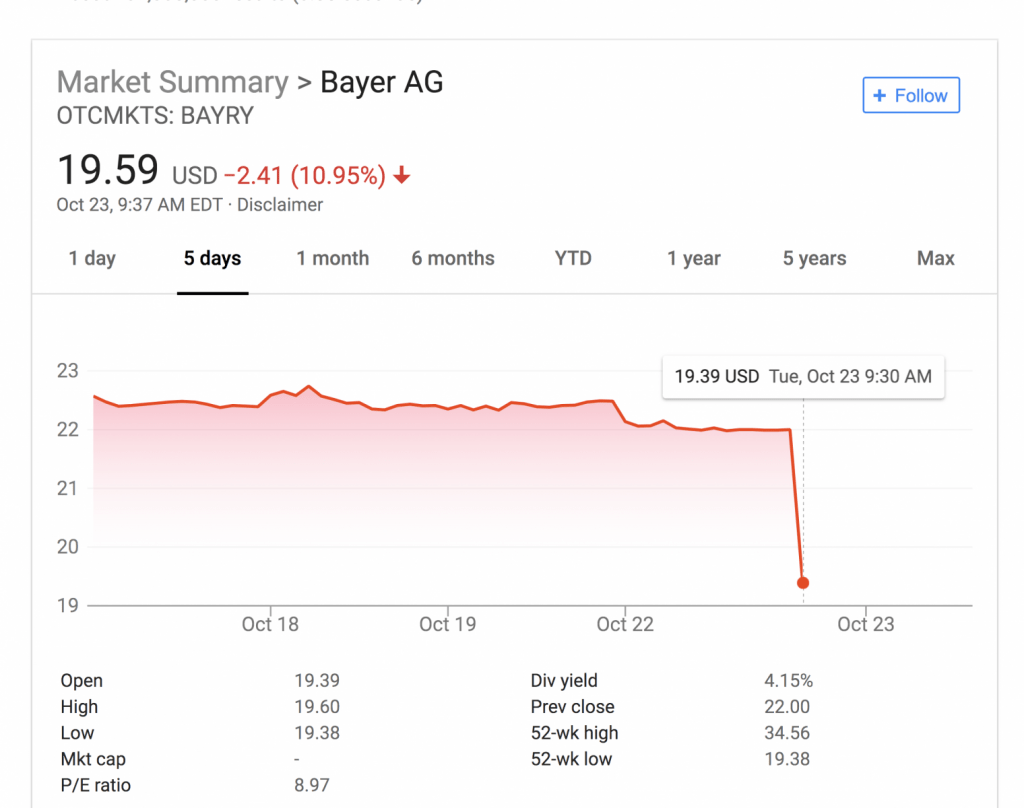 Bayer greedily bought and swallowed the ‘poison pill’ of Monsanto without considering its true liability. Fifty-seven billion Euros of market cap down the drain later, now their headache is taking on epic proportions…..

Bayer, the new owner of the agrochemical company Monsanto, has admitted that the number of U.S…

Superior Court Judge Suzanne Bolanos said in a tentative ruling that she would likely overturn $250 million in punitive damages because there was no convincing evidence that Monsanto had knowingly manufactured a harmful product or acted “despicably” toward the plaintiff, Dewayne “Lee..

An MIT scientist has warned that Monsanto’s Roundup herbicide will cause half of all children to develop autism by the year 2025. According to Stephanie Seneff, PhD, recent research shows a strong correlation between the increased use of Roundup on crops and the rising rates of autism…

(Natural News) The current estimated annual cost for nine of the most common neurological disorders in the U.S. was a hefty $789 billion, a recent paper revealed. According to the paper, these conditions include Alzheimer’s disease and other forms of dementia, traumatic brain injury and Parkinson’s disease, as well as epilepsy, multiple sclerosis, and spinal cord injury.

Researchers also projected that health care costs associated with brain damage will continue to increase as the number of elderly patients were expected to double between 2011 and 2050. Data showed that medical costs related to dementia and stroke alone were estimated to be more than $600 billion by 2030.

“The findings of this report are a wake-up call for the nation, as we are facing an already incredible financial burden that is going to rapidly worsen in the coming years. Although society continues to reap the benefits of the dramatic research investments in heart disease and cancer over the last few decades, similar levels of investment are required to fund neuroscience research focused on curing devastating neurological diseases such as stroke and Alzheimer’s, both to help our patients and also to avoid costs so large they could destabilize the entire health care system and the national economy,” said lead author Dr. Clifton Gooch, ScienceDaily.com reports.

The findings were published in the Annals of Neurology.

Is drug use a contributing factor to brain damage?

Mounting evidence point to certain medications as risk factors in developing some of the most debilitating neurological conditions in the country. A study published in the JAMA Internal Medicine found a correlation between long-term use of anticholinergic medications like Benadryl and the onset of dementia. Anticholinergic drugs were shown to inhibit the action of acetylcholine, an organic chemical that plays a crucial role in learning and memory…

Canada has gone where the FDA fears to tread, testing commonly consumed foods for glyphosate residues from Monsanto’s Roundup weedkiller – and the results are literally sickening. The Canadian Food Inspection agency reports that glyphosate, the carcinogenic key ingredient in Monsanto’s Roundup, was found in 29.7 percent of 3,188 foods tested in the last two years. Glyphosate was found in…

Will Monsanto finally get what they deserve for their crimes against humanity? The Miller Firm hopes to bring the corporate giant to their knees by pursuing a lawsuit that shows Roundup can cause non-Hodgkin’s lymphoma and multiple myeloma.

And perhaps, in their pursuance of this litigation, the EPA will be taken down, too.

Email evidence indicates that not only did Monsanto help write the so-called cancer studies on Roundup, but that EPA officials colluded to keep reports on glyphosate’s carcinogenic status in favor of the industry. Former EPA scientist Marion Copley’s heartbreaking email not only illustrates the cancer-causing capacity, but that the EPA is riddled with corruption and greed.

Copley’s letter describes a host of ways in which glyphosate can cause cancer:

“Any one of these mechanisms alone listed can cause tumors, but glyphosate causes all of them simultaneously. It is essentially certain that glyphosate causes cancer. With all of the evidence listed above, the CARC category should be changed to ‘probable human carcinogen,’” Copley states. Copley passed away in 2014, before the IARC finally did come to reach this conclusion.

The stories became far too frequent to ignore.

Emails from folks with allergic or digestive issues to wheat in the United States experienced no symptoms whatsoever when they tried eating pasta on vacation in Italy.

Confused parents wondering why wheat consumption sometimes triggered autoimmune reactions in their children but not at other times.

In my own home, I’ve long pondered why my husband can eat the wheat I prepare at home, but he experiences negative digestive effects eating even a single roll in a restaurant.

There is clearly something going on with wheat that is not well known by the general public. It goes far and beyond organic versus nonorganic, gluten or hybridization because even conventional wheat triggers no symptoms for some who eat wheat in other parts of the world….

Source: he Real Reason Wheat is Toxic (it’s not the gluten) – Prepare for Change

A court case in California has forced the release of emails between Monsanto and the EPA, and the contents are sickening. We now have certifiable proof that Monsanto has always known Roundup causes cancer.

But even worse, we now have proof the EPA is a corrupt organization that is more interested in money than protecting the environment or the health of Americans.

This weedkiller isn’t just used on GMOs but on 70 different food crops in the U.S. – it’s in practically everything Americans eat. So, if glyphosate in Roundup is causing cancer and other diseases, I want to know about it and get it out of our food – don’t you?

Food Babe reports: Monsanto makes billions off of Roundup sales, so they don’t want anyone to question its safety. Some never-before-seen confidential documents just released in a court case against Monsanto give us a glimpse into how they are working to influence the EPA (who is in charge of determining whether they are allowed to sell Roundup anymore) and undermine any efforts to ban its use.

These documents show what many of us have known and suspected for quite some time… Monsanto is manipulating scientific research and has gotten some EPA officials on their side who seem to be helping them cover-up the health dangers of Roundup so they can keep it on the market.

Keep in mind… Monsanto and the EPA are both fighting to stop the public seeing these internal emails! Why do you think that is?…

By Dr. Joseph MercolaAluminum is a known neurotoxin, and according to Professor Christopher Exley of Keele University, aluminum-containing products are likely fueling the rise in Alzheimer’s disease.[1] In an article published in the journal Frontiers in Neurology,[2] he writes: “We are all accumulating a known neurotoxin in our brain from our conception to our death. The presence of aluminium in the human brain should be a red flag alerting us all to the potential dangers of the aluminium age. How do we know that Alzheimer’s disease is not the manifestation of chronic aluminium toxicity in humans?”…

(Organic and Healthy) We all know Monsanto has their fingers in all areas of the food industry, but did you know how skilled they are at burying news stories? It’s pretty alarming — but we’re here to tell you how we can help reverse that trend by making our voices heard!

Source: Monsanto is Scrambling to Bury This Breaking Story – Don’t Let This Go Unshared! | Stillness in the Storm

‘New government data offers a potentially unappetizing assessment of the U.S. food supply: Residues of many types of bug-killing pesticides, fungicides and weed-killing chemicals have been found in roughly 85 percent of thousands of foods tested. Data recently released by the U.S. Department of Agriculture shows varying levels of pesticide residues in everything from mushrooms…

The International Agency for Research on Cancer (IARC), facing criticism over its classification of carcinogens, has reportedly been advising its scientific experts not to publish internal research data on its 2015 report on “probably carcinogenic” glyphosate. Read Full Article at RT.com

Research scientist Anthony Samsel has confirmed that glyphosate, a key active chemical in Monsanto’s herbicide Roundup®, has been found in most vaccines!  In this video, we hear Dr Samsel reciting his findings.

Additionally, Dr Samsel sent a letter to his Congressional Senator from New Hampshire wherein he gives Senator Shaheen permission to share his laboratory data on glyphosate-contaminated vaccines with “all members of Congress and the public.”

What will Senator Shaheen do?

END_OF_DOCUMENT_TOKEN_TO_BE_REPLACED

Nearly half a century has passed since Monsanto scientist John Franz first discovered glyphosate, the active ingredient in Roundup, which today is sprayed heavily all over the globe, including on our food and water, and in recreational areas where people go for leisure.

END_OF_DOCUMENT_TOKEN_TO_BE_REPLACED

(NaturalNews) Do you think gluten-free foods are always healthy and wholesome? Think again: many of them are highly processed junk foods loaded with GMOs and MSG.