Year 2017 will see much more presence of the Light on the surface of the planet than any of the previous years, as the presence of the non-physical Light particles from the Galactic Center has increased greatly. On the last day of 2016, there were many signs in the sky in the form of polar stratospheric clouds and other unusual cloud phenomena: 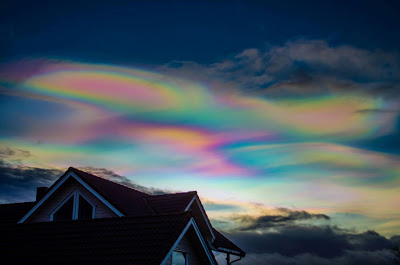 Some people have interpreted this increased Galactic Light as a sign of a possible Galactic Superwave (read: the Event) in 2017:
http://etheric.com/will-superwave-arrive-2017/
In the meantime, clearing of the Chimera Group continues. Recently, an infiltration of the Chimera Group within the rank of the Light Forces inside of this Solar system has been detected. The Chimera was even able to hijack one of the teleportation portals that was transporting captured Cabal members that were about to be taken to the Galactic Central Sun and these were siphoned off to a Chimera base in the Kuiper belt. This situation has already been resolved.
It has also been discovered that the Outer barrier / Tachyon membrane is to a certain degree permeable to plasma anomaly and under certain conditions negative plasma entities can cross that membrane through the tunnels of Set in both directions, in and out of the Solar system. The plasma outside of our Solar System is not yet completely free of primary anomaly, especially the plasma filament that stretches along the Orion arm:
https://en.wikipedia.org/wiki/Orion_Arm

Plasma anomaly in this region originates from the Orion galactic wars the the last few million years and has been almost completely healed, but the small amount remaining still interacts with the Yaldabaoth entity. The highest concentration of the anomalous plasma is from Rigel star system towards the Taurus dark cloud, also called Taurus molecular cloud:
https://en.wikipedia.org/wiki/Taurus_Molecular_Cloud_1
As a response to all this, a large powerful galactic Light group hundreds of millions strong has entered the Solar System and it will assist in the final clearing of the Chimera. The identity of this positive group must not yet be revealed.
Also, the Resistance and all breakaway groups that are allied with the Galactic Confederation have begun „intense activities inside of this Solar system and beyond, on a level never before encountered.“
All breakaway groups (SSP and underground ones) that are not yet allied with the Galactic Confederation are still infiltrated by the Chimera.
On the surface of the planet, this infiltration is even stronger. Many times, when things are not going according to the plan, that is a clear sign of infiltration. ALL positive groups on the planet suffer from infiltration from Chimera or their minions. Many geopolitical events are confirming this.
The reals reason why Daesh could retake Palmyra was infiltration very high in the Russian military command. Embarrassed, Russian analysts gave their own explanation why that happened:
https://sputniknews.com/middleeast/201612141048542487-syria-palmyra-daesh/
They forgot that simple computer vector analysis of photos from powerful Russian spy satellites would easily discover a group converging to a single point.
The Cabal wants to also infiltrate other BRICS countries as well, and they are behind drastic war on cash in India:
https://www.sott.net/article/338647-A-well-kept-open-secret-Washington-is-behind-Indias-brutal-experiment-of-abolishing-most-cash
The most dangerous of all is Kissinger’s strategy to side with Russia against China through Trump, attempting to break the Eastern Alliance:
http://journal-neo.org/2017/01/09/is-trump-the-back-door-man-for-henry-a-kissinger-co/
http://www.independent.co.uk/news/world/asia/rex-tillerson-south-china-sea-state-media-prepare-military-clash-donald-trump-global-times-a7525061.html
Many people are beginning to understand that Trump is just a puppet and his policy is orchestrated by invisible handlers from behind the scenes:
https://truthearth.org/2017/01/03/a-short-word-about-presidents-and-their-puppet-masters/
http://www.zerohedge.com/news/2016-12-30/trump-exactly-where-elites-want-him
http://journal-neo.org/2016/11/25/the-dangerous-deception-called-the-trump-presidency/
https://www.armstrongeconomics.com/international-news/north_america/2016-u-s-presidential-election/is-trump-draining-the-swamp-or-filling-it/
On a brighter side, the Chinese have announced that the have managed to put the famous EmDrive prototype for testing on their space station:
http://www.ibtimes.co.uk/emdrive-chinese-space-agency-put-controversial-tech-onto-satellites-soon-possible-1596328
Soft disclosure continues and asteroid mining is becoming mainstream:
http://seekingalpha.com/article/4034859-miners-may-go-galactic-asteroid-mining
There is even a website that estimates the economic value of certain asteroids:
http://www.asterank.com/
For those who would like to become more directly involved in the planetary liberation, here is a very good example how a liberation group can operate (with a short Cobra interview added as a bonus):
http://2012portal-hungary.blogspot.com/2017/01/cobra-interview-with-hungarian-cobra.html
Those who feel so guided can help feeding people in Malawi with their generous donations (on thew right hand side of the page little below the top):
http://prepareforchange.net/orphanages-in-malawi/
Situation in Malawi and in many other places in Africa is far from perfect, but Light will reach there also.
Victory of the Light!

I’m an author on these subjects and I can say with some authority, Michael Salla did a really good job comparing the theories of pole shift authors like Charles Hapgood, Chan Thomas, and Rand Flem-Ath in this presentation. The basic conclusion from these ice core samples is that although Eastern Antarctica has been covered in … END_OF_DOCUMENT_TOKEN_TO_BE_REPLACED