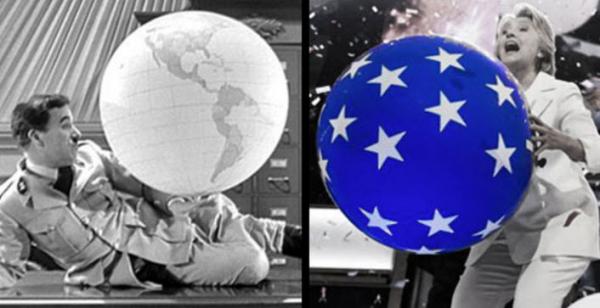 Submitted by Mac Slavo via SHTFPlan.com,

To the left, a shot from Charlie Chaplin’s The Great Dictator; to the right, Hillary’s acceptance speech was a carefully scripted triumph over the democratic process… as demonstrated by her playing with the balloons like the world is her toy.

In a fair election, my best estimate is that Donald Trump would win in a landslide.

But this election will not be fair. In fact, few of them are.

For Trump’s part, there is no doubt that he has been this year’s sensation. A newcomer to politics, he has thrown out all the conventional rules, played by his own, and found a captivated country hanging onto his every word. Love him, hate him, or somewhere in between… no one can look away from the spectacle.

After a war within the party and the convenient disposal of 16 conventional GOP contenders, Trump is now the official Republican candidate and he is in a strong position. Coming out of the relatively calm Republican National Convention and going into the tumultuous DNC, Trump has enjoyed soaring poll numbers while Hillary has been losing ground fast to the scandals and corruption revealed by Wikileaks and other related mouthpieces.

But the fat lady has not sung.

Hillary’s coronation last night as she formally accepted her party’s nomination could hardly have been more forced. The entire Democratic convention has been stage-managed to downplay the overwhelming noise from Bernie supporters who are outraged and feel betrayed by Hillary.

The entire convention has had a certain air to it, a quality that reveals the desperation for power, and the crisp sense of danger that brings with it.

Protesters Rage Against the DNC: “Hillary Didn’t Get the Nomination. The Nomination Was Stolen”

To a casual observer, things might look typical enough, with a few sore losers and pipe dreamers wishing for an ideal country run by decent and fair people that either don’t exist or haven’t figured out how to win an election. But things are not typical – the paradigm is shifting. Politics realigns every 30 years or so, or at least that is the maxim that has held in political science. Only, the last shift has been 30 or 40 years overdue.

There is a reason for that, and the establishment has been fighting to stop the change for the past generation. They have faked out the cycle and kept the population under their thumb (when was the last time you saw a “real” presidential election that wasn’t a means to keeping the status quo?)

But delaying the inevitable won’t hold.

Why Trump Should Win…

As Michael Moore argued, Trump has been preaching the gospel of restoring America’s manufacturing, and is working to woo and turn to “red” the “blue” Rust Belt states where Americans once had strong middle class jobs, especially in Michigan, Ohio, Pennsylvania and Wisconsin. According to Moore’s numbers (which are cited to motivate support for Hillary and opposition to Trump), if Trump captures those key states in addition to the red states that Mitt Romney, a weak candidate, won in 2012, then Trump should win the electoral college:

I believe Trump is going to focus much of his attention on the four blue states in the rustbelt of the upper Great Lakes – Michigan, Ohio, Pennsylvania and Wisconsin. Four traditionally Democratic states – but each of them have elected a Republican governor since 2010 (only Pennsylvania has now finally elected a Democrat). In the Michigan primary in March, more Michiganders came out to vote for the Republicans (1.32 million) that the Democrats (1.19 million). Trump is ahead of Hillary in the latest polls in Pennsylvania and tied with her in Ohio. Tied? How can the race be this close after everything Trump has said and done? Well maybe it’s because he’s said (correctly) that the Clintons’ support of NAFTA helped to destroy the industrial states of the Upper Midwest.

In fact, Moore is right. Nobody wants any more Flint, Michigans (where the water is contaminated and poverty seems to be airborne and contagious), least of all Michael Moore.

Trump’s appeal is much broader than just his sensational antics and controversial statements. He is resonating with America because he is speaking to the wounds of those struggling to cling to what’s left of the middle class American Dream.

And the strength of Trump’s position there is buttressed by the cold fact that the Clinton’s strong support for NAFTA played a major role in the downward spiral of the Rust Belt, and many other parts of the United States.

Trump’s appeal to bringing jobs back to America has to sound like not only a good campaign strategy, but an actual sound idea.

Things have reached a point where nearly every American – regardless of how little they pay attention to news and world affairs – is feeling the damage that has been done. NAFTA, GATT, the WTO and an entire shift into pseudo-governing structures of globalism that have eaten away at the sovereignty of the United States and devoured the prosperity of its people have taken a serious toll on our way of life. And we have all been programmed to take it lying down.

The steady flow of funny money, artificially pumped out by the Federal Reserve has kept many from noticing it, but the real world effects are still hitting people on the street. Not only does the dollar not go as far as it used to, but everything in life is increasing in cost, and getting watered down in value and substance. Society is acting out one big charade, and pretending not to notice the outrage, dissent and anger seeping through the cracks and edges.

Inevitable and determined to win at all costs

Rather than let that burst on her watch, and during the only opportunity she has left in this lifetime, Hillary Clinton and her minions have rearranged all the deck chairs in her favor to force a win. It certainly hasn’t come from the grassroots. Where necessary, the Democratic party has fudged primaries and stolen them outright. The mainstream media has been scripted around her as an anointed figure who is untouchable and beyond reproach. They have stifled exposure of Bernie and would have done so to any other rival… if only any others had dared to enter the race.

Instead, the campaign to elect Hillary became an unrelenting junta to force her into office in spite of the will of the people, the rules of the game or the ever-expanding negative image of the former First Lady, Senator and Secretary of State whose corruption and ties to bad deeds are both legendary and sufficiently documented to warrant life without parole.

There was a never a realistic chance that Hillary would be prosecuted or even reprimanded over her email scandals, because the fix was in a long time ago. Those who would theoretically hold her into account were appointed by her husband, or by President Obama, and their cooperation was assured in private.

Though many have argued that you can’t put lipstick on a pig, that is exactly what has taken place. 2016 is more of a farce than ever… and there is still another round to go.

Only One Persons Stands Between Her and the Presidency

Can anyone else see that the most rigged and stolen election of all time is shaping up? If the Democratic party doesn’t want Hillary, what makes anyone think the entire country wants anything to do with her?

Before you answer that openly, make a strong educated guess about who the next president is going to be… and how many bodies she will have to climb over to get there.

What Wikileaks exposed with Debbie Wasserman Schultz and the DNC, and what the emails have revealed about Hillary and the Clinton Foundation are surely only the tip of the iceberg. The stories of the delegates who were silenced or kicked out of the convention, and many other deceitful acts to destroy dissent and keep up appearances suggest some of the rest of the story… and it is anything but democratic or “of the people” – though very likely the whole of it will never be known.

There is something very, very wrong going on and it is time that everyone – regardless of ideology, party affiliation or politics – needs to face up to. Preliminary evidence indicates strongly that there has been a very carefully orchestrated coup taking place… and if successful, it will have only one logical conclusion:

Total power, at any price, with a facade of support and momentum that just isn’t there from anyone other than a handful of elite billionaires, and a cadre of clients with addresses that are either foreign or based on Wall Street.

If you missed the convention coverage, then you have got to see Hillary playing with the balloons after her speech.

There really is no wondering who she is concerned about… herself, of course.

As I mentioned above, it is reminiscent – even spot on – of Charlie Chaplin’s amazing parody in The Great Dictator, where his version of a Hitler-esque autocrat toys with the world as his plaything.

We are in for a world of hurt if what I think is going to happen turns out. The entire democratic process is being pushed back under the water, and a crude, fake smile is broadcast for appearances, while holding it all down.

Source: No One Can Stop Her… And She Knows It: “This Election Won’t Be Fair” | Zero Hedge