By: Sorcha Faal, and as reported to her Western Subscribers A dangerously worded, but fascinating new Security Council (SC) report circulating in the Kremlin today, seemingly echoing a story coming straight out of the Arabian Nights, states that the final phase of Cooperation 201.. Welcome to the smartest, most active, and the most loving audience in the world. We started this channel to garnish prayer to change to help save America and stop the coming World Conflict and so far, so good. ==========.. 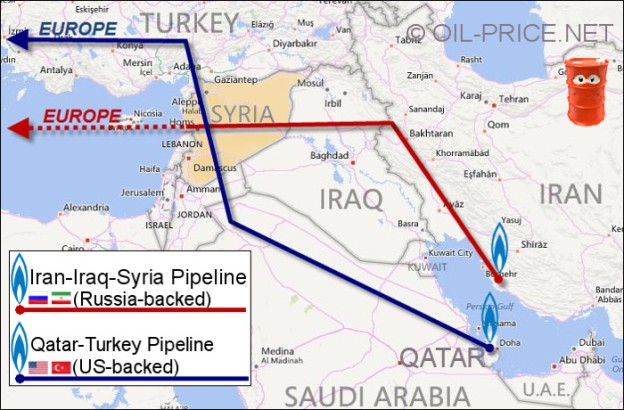 Credit – shoebat.com One of the great enigmas of the Islamic State’s rapid rise to a globally-recognized terrorist organization was how it was financed. Though Wikileaks had previously confirmed that some Middle East monarchies, namely Saudi Arabia and Qatar, were directly funding ISIS, this has never been publicly acknowledged by most governments. Instead, the officially…

Jim W. Dean – This admission by Qatar to keep the Syrian War going even if Trump pulls out support for the opposition revealed how embedded the “rent-a-Jihadi” game has become.

WikiLeaks have released an email in which Hillary Clinton admits that Qatar and Saudi Arabia – two of her mega-donors – provide financial and logistical support to ISIS. In the extraordinary email, sent to John Podesta in 2014, Clinton lays out an eight point plan to defeat ISIS in Iraq, and mentions that Saudi Arabia and…

October 11, 2016 By: Sorcha Faal, and as reported to her Western Subscribers

Another grim report circulating in the Kremlin this morning issued by the Ministry of Defense (MoD) is warning that the British government is preparing to go into emergency session today in order to debate their nations military forces joining with those of the Obama regime to begin an all out assault against the Federation in the Syrian region of the Levant War Zone—and that should it do so would unleash World War III.  [Note: Some words and/or phrases appearing in quotes in this report are English language approximations of Russian words/phrases having no exact counterpart.]

According to this report, the British Commons is soon to begin an emergency 3-hour debate with them stating beforehand that Western air forces must be willing to confront Russian military jets over the skies of Syria to enforce a no-fly zone and protect the citizens of eastern Aleppo—and that is being led by British lawmaker Andrew Mitchell who just hours ago outlandishly likened Russia’s behavior in Syria to that of Nazis.

With the threat of war between the Federation and the West now said to be “more dangerous” than the Cold War, this report continues, these British lawmakers, like their Obama regime counterparts, have begun propagandizing their own citizens as to the true nature of this conflict—and is most simply stated as Russian military forces aiding the Syrian Arab Army in its freeing the peoples of Aleppo (Syria) from the barbaric Islamic State (ISIS/ISIL/Daesh) terror they’ve been forced to live under the past 3 years.

END_OF_DOCUMENT_TOKEN_TO_BE_REPLACED

You guessed it – Coo Coo Pants herself

And not the Fake One who was at the Debates

So while President Obama is openly supporting ISIS Dirty Hellry is openly selling them weapons.

The Reagan administration officials hoped to secure the release of several U.S. hostages, and then take proceeds from the arms sales to Iran, to fund the Contras in Nicaragua.
Sounds familiar?

END_OF_DOCUMENT_TOKEN_TO_BE_REPLACED

Liberating the Syrian pentagram is the talk of many right now within the esoteric fields of study as well as those involved in covert geopolitical action. It is with no doubt that much of Washington D.C.’s effort and focus right now is and has been for the past 4 years specifically to forcefully overthrow the sovereign and democratically elected regime of Bashar al-Assad.

It is easy to understand the reasoning for this in a geopolitical sense, as Syria is pivotal in the control for Middle Eastern oil and natural gas. On a deeper, more occult level, Syria has special importance on a global level.

First though, let’s look at the political and financial importance of Syria.