In an interview with Sky News, Rudd said the self-probe by the intelligence agency is “the right first step” in learning the lessons from last week’s concert bombing.

“There is a lot of information coming out at the moment about what happened, how this occurred, what people might or might not have known. And I think it is right that the MI5 takes a look to find out what the facts are,” she said.

The secretary added that in the future “we can look if anything else might need to be done” in terms of investigating the security breach, but stressed that at the moment, the focus should be on wrapping up the operation triggered by the May 22 terrorist attack.

MI5 has launched urgent inquiries into how it missed the danger posed by the Manchester bomber. Home Secretary @AmberRuddHR explains

Earlier the BBC reported that the MI5 had been alerted about Salman Abedi’s extremist views at least three times before he brought a home-made bomb to the exit of Manchester Arena last week.

It added that a separate report into the overlooked threat would be prepared for ministers and officials overseeing the work of MI5.

READ MORE: Members of Manchester bomber network may still be on the loose – UK home secretary

Abedi, a British-born man of Libyan descent, was one of 20,000 people identified by the MI5 as a threat, but not one of the 3,000 people who are under active investigation, according to a Reuters source.

On Monday, British police reported arresting the 16th individual suspected of connections with the Manchester bombing. The 23-year-old man was arrested in Shoreham-by-Sea, Sussex, “on suspicion on offences contrary to the terrorism act,” Greater Manchester Police tweeted. 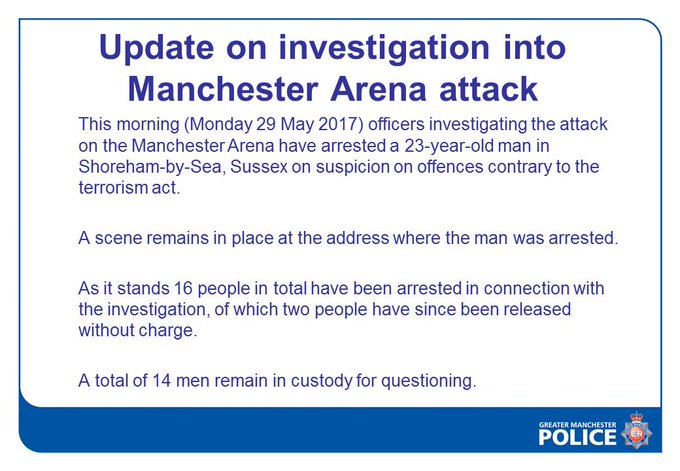 UPDATE: Man arrested in Shoreham by Sea in connection with Manchester Arena attack

Two have been released without charge, while 14 men remain in custody for questioning, the police said.

On Sunday, the UK scaled down the terrorist threat in the country from “critical” to “severe.”

The suicide bombing killed 22 people as young as eight and left 59 injured on May 22. The attack, for which Islamic State (IS formerly ISIS/ISIL) terrorist group has taken credit, is the deadliest in the UK since the coordinated bombings in London in 2005.

If you sleep with dogs you can get fleas. This is worse, much worse.

[ Note: If you have no interest or knowledge of background in Secret Space War matters, the secret and almost completely hidden machinations of the Top Chieftains of the Khazarian Mafia (KM), or the incredibly dark, evil, etheric non-corporeal entities which they serve in order to get their power, you are probably wasting your time reading this article. For those interested, this is a long article and you can save time by reading the bold print and then the conclusion. Doing this you will get the most important points of this article.

Thanks to a major world power shift that has occurred, the Khazarian Mafia (KM) has been significantly checkmated and is now being progressively and incrementally deconstructed. The KM’s biggest secrets have historically been protected by their Controlled Major Mass Media (CMMM) which refuses to publish the facts of their extreme evil because the KM Moguls that run it follow KM policy that has been set by the KM Top Chieftains.

Instead of publishing the truth, the CMMM publishes KM big lies, false-narrative and USG propaganda, and by doing so has created a false social reality which makes the truth implausible to most. Since the KM assassinated JFK, this false reality has traditionally caused most Americans to view truth nuggets dispensed by the Internet’s Alternative Media as mere “conspiracy theory” by whacky “conspiracy theorists”.

END_OF_DOCUMENT_TOKEN_TO_BE_REPLACED

Audio in video below:

TMR Editor’s Note
Years prior to the The Millennium Report website going online one of our writers conducted exhaustive research into the “Paul McCartney is Dead” conspiracy.  It is, in fact, a real conspiracy because of the number of willing participants who, by necessity, had to participate in it in order for it to be successful for almost fifty years.

However, only one element has been missing over the past 49 years. And that is a member of The BEATLES stepping forward to tell the unvarnished truth. It now appears that this little secret has been finally told by Ringo Starr. Certainly, with the death of his band mates, except ‘Paul’ of course, the burden of this secret became greater for him to carry alone as the years wore on.

END_OF_DOCUMENT_TOKEN_TO_BE_REPLACED

Today is the second anniversary of the downing of Malaysia Airlines Flight 17, and we still do not know the explanation.

Washington and its European vassal politicians and media instantly politicized the event: The Russians did it. End of story. After 15 months of heavy anti-Russian propaganda had imprinted the message on peoples’ minds, the Dutch Safety Board issued its inconclusive report.

By then, it was irrelevant what the report said. Everyone already knew that “the Russians did it.”

I remember when pre-trial media accusations resulted in dismissed cases. Anyone declared guilty prior to presentation of evidence and conviction was considered to have been convicted in advance and unable to receive a fair trial. Such cases were dismissed by judges.